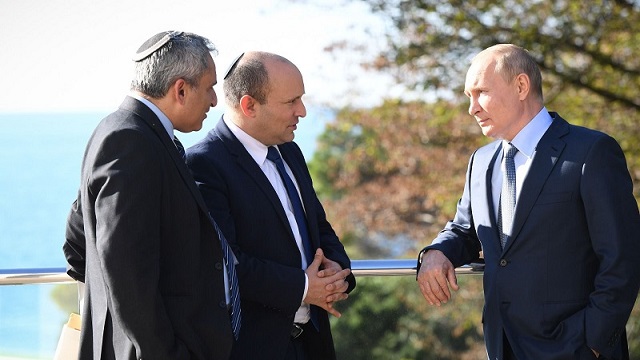 This is Prime Minister Bennett’s first official trip as the leader of Israel since assuming office in June. He has already gone to Washington for an official meeting with American President Joe Biden, and he attended the opening ceremonies for the year at the United Nations in New York.

In their conversation, President Putin asked how Prime Minister Bennett’s weekend in Sochi was and thanked the PM for what the President described as a good and in-depth meeting.

Prime Minister Bennett thanked President Putin for his warm hospitality and for what Bennett called a beneficial meeting which he said will help strengthen their two nations’ bilateral ties.

President Putin invited Prime Minister Bennett and his wife to visit St. Petersburg in the future. The Prime Minister accepted the invitation and replied that he would be happy to come for another visit.

Prime Minister Bennett commented on Facebook that his first meeting with Putin was “excellent,” “in-depth” and lasted more than five hours.

“Russia is a very important player in the region, in fact, it is a kind of our neighbor to the north, so relations with it are both strategic, but also almost every day, and we must maintain a direct and intimate line of dialogue,” said Bennett. “Against the backdrop of Sochi’s shores, Putin and I discussed a wide range of issues, from his special treatment of the Jewish people, to ways to deal with fundamentalist Islam.”

“Israel’s foreign relations are booming, our country has a lot to contribute to the world, in many areas, and many want to be near us. I will soon travel to the Emirates as well, for the first visit of an Israeli Prime Minister there, and then also to India, for a meeting with Prime Minister Modi,” he added.