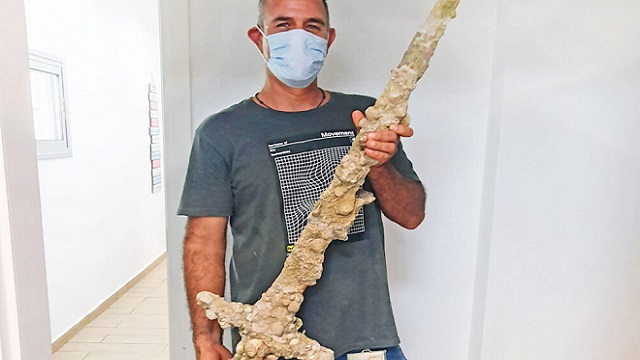 The latest biggest archeological find in Israel is a 900 year old crusader sword was discovered by an Israeli scuba diver on the coast of the Mediterranean Sea. The three foot long sword was found on Saturday, along with some pottery fragments, and was turned over to the Israel Antiquities Authority.

Imagine going for a swim one day and making one of the world’s biggest archeological finds. You just went to the beach one morning and while in the water your foot got caught on something that had washed in with the tide.

Do you like to scuba dive? Have you ever gone for a dive at a location already known to be where a ship sunk, or some ancient city was flooded after an earthquake? Now imagine that you go diving in an area where nothing special is expected to be, only to find a priceless ancient artifact.

Well, this is what happened to Shlomi Katzin, who lives in the coastal town of Atlit located in northern Israel.

According to Nir Distelfeld, Inspector for the IAA’s Robbery Prevention Unit, “the sword, which has been preserved in perfect condition, is a beautiful and rare find and evidently belonged to a Crusader knight. It was found encrusted with marine organisms, but it’s apparently made of iron. It is exciting to encounter such a personal object, taking you 900 years back in time to a different era, with knights, armor, and swords.”

The location where the sword was discovered has been under review by the Israel Antiquities Authority for some time now. The site was first located by Boaz Langford and Rafael Bahalul. It was once a natural anchorage was used as a temporary natural shelter for ships during the Late Bronze Age, about 4,000 years ago. An ancient anchor was also discovered there.

Kobi Sharvit, director of the IAA’s Marine Archaeology Unit, said, “The Carmel coast contains many natural coves that provided shelter for ancient ships in a storm, and larger coves around which entire settlements and ancient port cities developed, such as Dor and Atlit. These conditions have attracted merchant ships down the ages, leaving behind rich archaeological finds. The recently recovered sword is just one such find.”