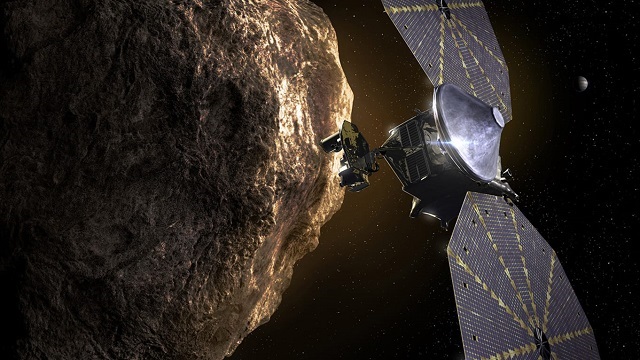 NASA‘s Lucy craft will be over 14 meters (over 46 feet) from tip to tip, but most of that is the huge solar panels (each over 7 meters (almost 24 feet) in diameter) needed to power the spacecraft as it flies out to the orbit of Jupiter. All of the instruments, and the 2-meter (6.5 ft)-high gain antenna needed to communicate with Earth, will be located on the much smaller spacecraft body.
–

L’Ralph is Lucy’s color visible imager (the Multi-spectral Visible Imaging Camera, MVIC, 0.4-0.85 microns) and infrared imaging spectrometer (Linear Etalon Imaging Spectral Array, LEISA, 1-3.6 microns). LEISA will allow us to look for the absorption lines that serve as the fingerprints for different silicates, ices and organics that likely will be on the surface of the Trojan asteroids. MVIC will take color images of the Trojan asteroid targets, and help determine how active they are.

L’LORRI, the LOng Range Reconnaissance Imager is the high spatial resolution visible imager. It is panchromatic, covering the wavelengths 0.35-0.85 microns. This camera will provide the most detailed images of the surface of the Trojans. 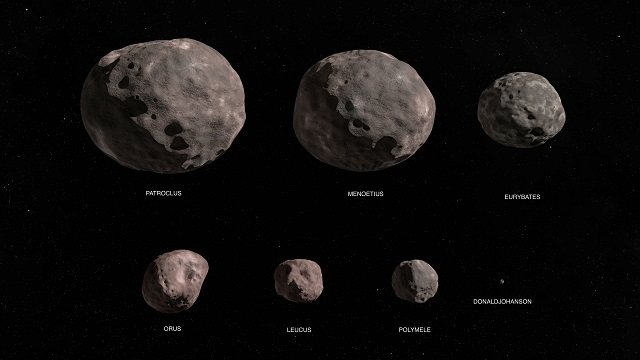 L’TES is the Thermal Emission Spectrometer. It is similar to instruments flying on OSIRIS-REx and Mars Global Surveyor. This infrared spectrometer (6-75 microns) will allow the Lucy team to learn much more about the properties of the Trojans such as their thermal inertia, how well the bodies retain heat, which teaches us about the composition and structure of material on the surface of the asteroids.

Lucy will be the first space mission to explore a population of small bodies known as the Trojans. The Trojans are outer Solar System asteroids that orbit the Sun “in front of” and “behind” the gas giant Jupiter, at the same distance from the Sun as Jupiter.

The gas giant is massive enough that normally it scatters away all asteroids in its vicinity, but, due to the combined gravitational influences of the Sun and Jupiter, these Trojan asteroids have been trapped on stable orbits (around what is known as the Lagrange Points) for billions of years. These Trojans provide a unique, never-before-explored sample of the remnants of our early Solar System.

The Lucy mission is named after the fossilized skeleton of an early hominid found in Ethiopia on Nov 24, 1974 by Donald Johanson and Tom Gray. That Lucy in turn was named by expedition member Pamela Alderman after a celebratory evening dancing and singing to the Beatles’ song “Lucy in the Sky With Diamonds.” Just as that Lucy fossil provided unique insights into humanity’s evolution, the Lucy mission promises to revolutionize our knowledge of planetary origins and the formation of the Solar System.

Lucy will fly by and carry out remote sensing on seven different Trojan asteroids to address the following science objectives: