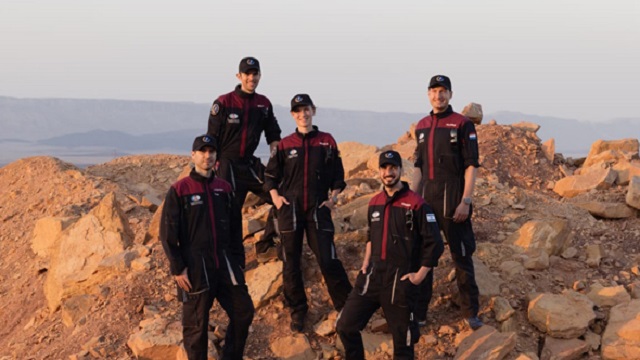 Five astronauts from the Austrian Space Forum (OeWF) began a 21 day simulation of what it would be like to live in a dome on Mars. The astronauts entered the dome yesterday, Sunday. The simulation is being conducted in Israel’s Negev desert right near the town of Mitzpeh Ramon, in cooperation with the Israel Space Agency.

If you have ever been to the Ramon Crater in Israel, then you know that its terrain looks a lot like Mars. This part of the Negev desert is rocky and red, like Mars. It would be the perfect spot to film a movie about Mars. In fact, to the east in Jordan the Wadi Rum area, with similar terrain, has been used by movie to simulate the surface of Mars.

The expedition will be carried out in a Martian terrestrial analog and directed by a dedicated Mission Support Center in Austria. A small field crew of highly trained analog astronauts with spacesuit simulators will conduct experiments preparing for future human and robotic Mars exploration missions.

Simulating Mars Human-robotic surface activities in terrestrial analogs, say the project’s leaders, has evolved into an efficient tool for developing exploration mission architectures. They help to understand the advantages and limitations of future Human planetary missions, becoming an added value for the development of remote science operations, helping to understand the constraints and opportunities of the technology and workflows. 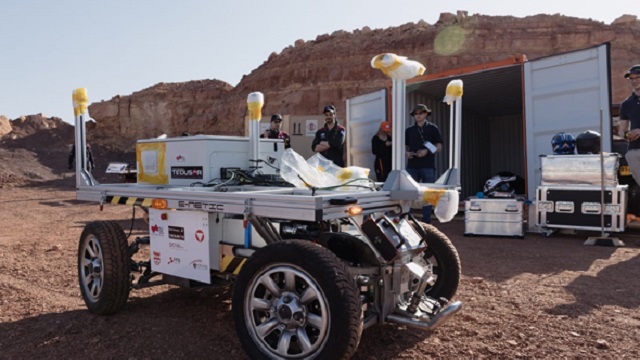 Part of the equipment that will be taken to the dome. Photo Florian Voggeneder OeWF

“The Israel Space Agency is a strong and reliable partner for our next Mars analog mission. With this mission, we will increase the fidelity of our Mars mission simulations even further. During the four-week duration of the mission our six analog astronauts will live and work at a habitat that is being provided by D-Mars and was specifically built for AMADEE-20. The Austrian Space Forum’s analog astronauts will perform more than 20 experiments in isolation to further facilitate the understanding of the advantages and limitations of future human planetary missions. This will be the largest, most complex Mars mission simulation in 2021,” noted Gernot Grömer, Director of the Austrian Space Forum. “The purpose of simulating a Mars Mission on Earth is to prepare for future crewed missions on the Red Planet. The OeWF is one of only five research groups worldwide that has developed a prototype spacesuit which will be donned by the analog astronauts during their mission.”