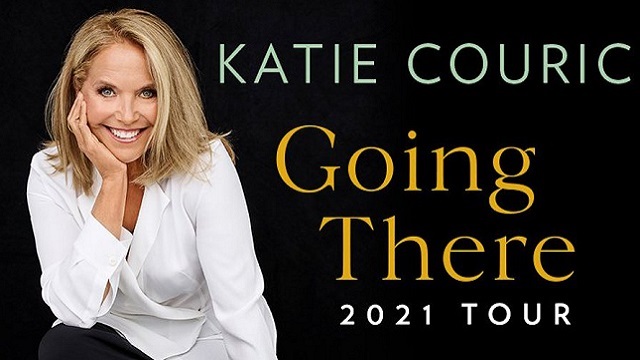 Katie Couric doesn’t like Martha Stewart, Deborah Norville, Prince Harry and many more people, like the late Larry King. Couric has made a career out of interviewing other people and getting them to spill the goods, as it were, revealing their best stories, both the good and the bad. Now Katie Couric has her own book coming out in which she tells all, and even burns many of her bridges to boot. “Going There,” comes out on October 26.

According to snippets from the book revealed by Britain’s The Daily Mail, Couric wrote of Prince Harry, whom she met at a polo match in 2012, that, “a strong aroma of alcohol and cigarettes seemed to ooze from every pore.” She thought that the young Prince was trying too hard to play the party animal in his youth.

She once attended a lavish party at the home of Jeffrey Epstein, the late rapist and paedophile. England’s Prince Andrew, who has for years now been embroiled in the wholly Epstein scandal and has been accused of rape himself, was in attendance.

This was, however, before the truth about Epstein was revealed. But at the party there were apparently plenty of very young girls around. On this Couric said, “I couldn’t imagine what Epstein and Andrew were up to, apart from trying to cultivate friends in the media. Which, in retrospect, they must have figured they’d need when the pedophilia charges started rolling in.”

On Deborah Norville, who Couric replaced on the Today Show in 1991, Couric said that her “relentless perfection,” hurt the show.

Larry King was 24 years older than Couric. Couric writes that he once made an unwanted pass at her, desxribing it as a “lunge” where King used both his hands and his tongue.

Couric, herself, has been known to annoy her fellow interviewers. She never spoke to the late comedian Joan Rivers again after she asked Rivers about her plastic surgery during an appearance on Couric’s own show. Rivers was said to have been so angry about it that she said of Couric, “Who does she think she is? She’s on her knees blowing 14-year-olds.” This was in reference to Katie Couric’s dating a much younger man at the time, Brooks Perlin.

While it has been a few years since the 64 year old newswoman had a regular gig in journalism, people are still wondering why she would be so hostile to o many people.

Ashleigh Banfield, who also worked for NBC News and began after Couric had become a star, was another object of Couric’s ire. Couric admitted that she did not offer younger Banfield any help since she feared that the newcomer was being groomed as Couric’s replacement. She told the NY Post that Couric’s book has “really hit me hard. She was my North Star. I always looked at her as one of the most brave presenters … at a time when we were all called bimbos. She was the best morning show host ever. I’m just gobsmacked.”