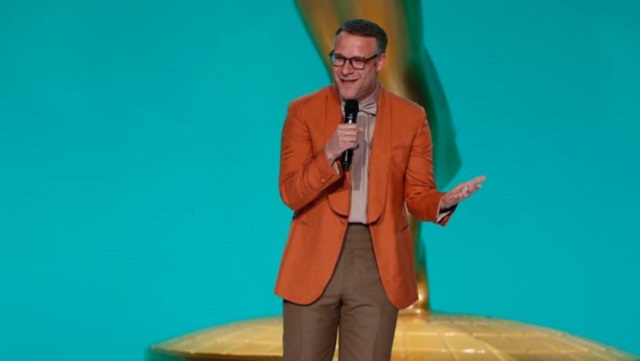 Seth Rogen just might not ever be invited back to an Emmy awards show as a presenter. This is because he chose to criticize the Emmy show’s organizers for having everyone sit together in a closed tent.

The comments came as Seth Rogen presented the first Emmy award of the show which was held last night, Sunday. Usually the Emmy Awards ceremony is held at the Microsoft Theater. But due to the continued Coronavirus crisis, producers needed to find an outdoor venue so that all of those people would not be in a confined indoor space, turning the show into a super spreader event.

Last year, the Emmys were held through video tele-conferencing.
–

Instead, the Emmy show this year was held at Los Angeles Live’s Event Deck, outside, in an air-conditioned tent.

But Seth Rogen went ahead and said what many in attendance were probably thinking: How was the closed tent any different than being indoors?

“Good to be here at the Emmy Awards. Let me start by saying: there’s way too many of us in this little room,” declared Rogen. “What are we doing? They said this was outdoors—it’s not! They lied to us.”

“We’re in a hermetically-sealed tent right now,” Rogen added. “I would not have come to this. Why is there a roof? It’s more important that we have three chandeliers than that we make sure we don’t kill Eugene Levy tonight. That is what has been decided.”

“This is insane,” Rogen said. “I went from wiping my groceries to having Paul Bettany sneeze in my face—so, that’s a big week! If anyone’s gonna sneeze in my face, Paul, I want it to be you.”
–

I’ve never been invited to the #MetGala but if I was, I’d wear a Kuato. pic.twitter.com/XVlYzGBaVE

Rogen ended his rant by saying, “That’s all the jokes I wrote.” But were they really jokes? They probably were not. Seth Rogen clearly did not write these things ahead of time and only thought of them once he arrived at the ceremony.

So Seth Rogen was the man this year to point out that the emperor was not wearing any clothes. Now let’s see if he is lauded for it, or panned.