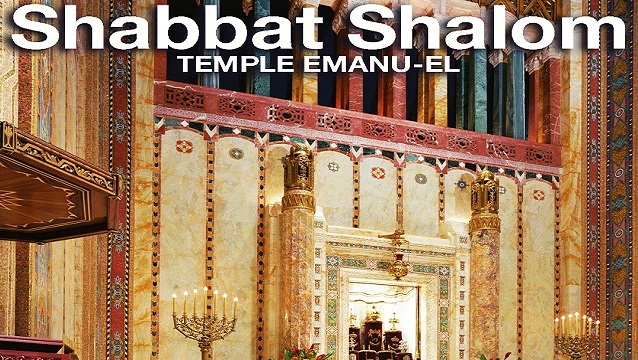 Rabbi Joshua M. Davidson of Manhattan’s Temple Emanu-El had a very special announcement for his congregation last week on the first night of the Rosh Hashana holiday. He told his synagogue that it had been the beneficiary of a grand largess in the amount of $10 million donated by philanthropist John H. Streicker. This was a great present for the Jewish New Year.

Located at 1 E 65th St, New York, in Manhattan’s Uper East Side, Temple Emanu-El is a Reform Jewish congregation that dates back to 1845 when it began its history in lower Manhattan. The synagogue moved to its current location in 1927. At the time, Emanu-El was the largest synagogue in the world.

With a sanctuary that seats more people than St. Patrick’s Cathedral, which is only 10 blocks south, and designed by Jewish architects, this stately structure in the Romanesque-revival style made a bold statement: Having left persecution and fear behind, New York City’s Jewry had carved out its place in the mainstream of American life and reached the upper echelons.
–

John H. Streicker is a longtime Temple Emanu-El board member, as well as an attorney and international real estate investment advisor. He is a native New Yorker and is passionate about Jewish learning and culture, regularly supporting causes critical to Jewish communities around the world.

“This extraordinary gift from a truly extraordinary individual and family will enable us to set an example to the world about how synagogues can embrace all those standing on the periphery of Jewish life searching for spiritual meaning and uplift,” said Joshua M. Davidson, the Senior Rabbi of Temple Emanu-El.

In 2016, Mr. Streicker donated the first $15 million to develop the Temple Emanu-El Streicker Center. Directed by Dr. Gady Levy, the Streicker Center has become one of the Jewish world’s preeminent cultural and educational destinations, drawing hundreds of thousands of participants in person and online from every state in the U.S. and 52 countries around the globe for a wide range of cultural, socio-political, historical, musical, culinary and other programs, in addition to its high-level and scholarly Skirball Academy classes. His combined contribution is one of the largest ever received by an American synagogue.

Temple Emanu-El’s President, Harris Diamond said, “John Streicker’s leadership has helped to connect hundreds of thousands of people to their own Jewish roots and faith, and has created a stronger, more accepting and more joyful Jewish community. Thanks to his remarkable generosity, Temple Emanu-El can continue to reach Jewish people in all corners of the world, as well as people of all faiths interested in spiritual and cultural enrichment and education.”