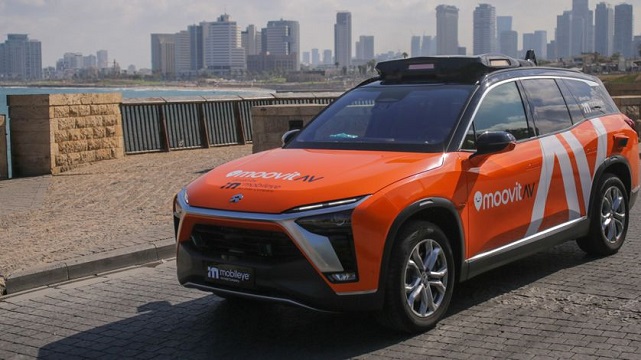 Israel’s Mobileye is now bringing its new robotaxi to Germany. The move is being made in partnership with SIXT.

Riders will be able to access the Mobileye service via the Moovit app as well as the SIXT app. The autonomous robotaxi offering will be included in SIXT’s holistic mobility platform ONE, which combines in just one app products for ride hailing as well as car rental, car sharing and car subscriptions. By integrating the services of cooperation partners like Mobileye, the ONE mobility platform gives SIXT customers worldwide access to more than 200,000 vehicles, 1,500 cooperation partners, around 1.5 million drivers and soon even robotaxi services.

The autonomous robotaxi option will be part of the ride-hailing service SIXT ride and was demonstrated during Alexander Sixt’s keynote walk-on. Mobileye also unveiled the vehicles – branded with MoovitAV and SIXT – that will be produced in volume and used for the robotaxi service in Germany. It is the first time Mobileye has publicly displayed its fully integrated self-driving system, known as Mobileye Drive, in a vehicle that will be used for commercial, driverless ride-hailing services.
–

The cat got out of the bag when when Intel CEO Pat Gelsinger revealed the existence of Mobileye’s new self-driving robotaxi, during a presentation at the 2021 IAA Mobility show.

Mobileye said that it is fitting that the company should launch the new robotaxi in Germany.This is because Germany is where the first automobile was invented and the country continues to be a major global hub of the automotive industry. Germany also has a world renowned extensive network of highways and is home to several of the world’s leading automakers and suppliers.

The country was also the first outside of Israel in which we began testing Mobileye’s developmental autonomous vehicle. And Germany recently became the first country in the world to authorize the deployment of Level 4 self-driving vehicles without a safety driver behind the wheel.

The law permits driverless vehicles on German roads, allowing Mobileye robotaxis to begin early-rider testing on Munich streets in 2022. The fleet will thereafter move from test to commercial operations upon regulatory approval. “Germany has shown global leadership toward a future of autonomous mobility by expediting crucial AV legislation,” Gelsinger said. “Our ability to begin robotaxi operations in Munich next year would not be possible without this new law.”
–

Mobileye revealed Mobileye Drive in April. This is their Level 4 self-driving system, which is now commercially available for a variety of autonomous-vehicle applications. Mobileye Drive incorporates an array of technologies that together form the Mobileye Trinity of autonomous-vehicle tech. The company’s AV sensing tech, True Redundancy, combines two independent perception sub-systems – one powered by cameras, another by radar and LiDAR – each capable of supporting full end-to-end autonomous capabilities.

Alexander Sixt, Co-CEO of Sixt SE, said, “This strategic collaboration is the next step in expanding our integrated mobility platform ONE and underlines our company’s evolution towards becoming the industry’s leading provider of innovative and digital premium mobility. We are delighted to leverage the remarkable technology leadership of Mobileye to bring driverless mobility to customers in Germany and beyond.”

Mobileye will own the robotaxi fleet used in the Munich service, while SIXT will draw upon its established expertise in providing, maintaining and operating the fleet. The vehicles will include the MoovitAV service and SIXT branding once the service launches in Munich, to make it easy for customers to distinguish between traditional ride-hailing and the autonomous fleet vehicles.