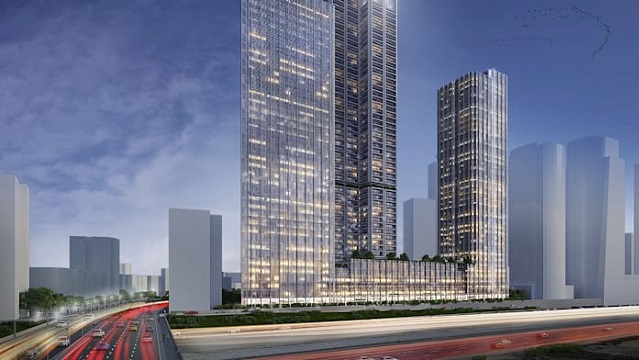 Two companies, BSR and Israel Canada, have won a tender to build a new three tower 60 floor project in Ramat Gan. The two companies bid NIS 937 million ($291 million) for the rights to the land and to build the new complex. The development itself will reportedly cost NIS 4 billion ($1.25 billion) to build.

The land to be developed is called the “Diamond Exchange triangle” which is located north of the Ramat Gan Diamond Exchange. Long before Israel became known as Startup Nation, with numerous successful high tech startups, it was probably best known as one of the world’s major centers for the trade in diamonds. There was, and still is, a Tel Aviv-Brussels-New York axis of diamond trade.

The new towers will be multi-function and include long-term rental housing, student dormitories, a commercial center and public areas. The government company for housing and rent, an apartment for rent, and the Israel Land Authority, the government agencies in charge of the land, granted the tender.

The Israel Lands Authority manages most of the lands in Israel The authority provides services for the transfer of residential and land rights, rezoning of land and permits for building additions, leases and lease of agricultural land

But as with every urban area, the original buildings that were constructed long ago were not made to last and are now rotting away, or have already been torn down. These is the case ll over the U.S. where places like lower Manhattan and parts of Brooklyn have seen huge new building projects going up everywhere. And the Tel Aviv area is no different.

Know3n as the Bursa, the Israel diamond exchange is located in a separate city, Ramat Gan. Ramat Gan is just east of Tel Aviv, separated from the larger city by the Ayalon freeway. All along the freeway one can see numerous new high rise residential buildings. But these new projects hide the old areas that lie behind them and this is where the new three tower project is to be developed.

The new project will comprise 200,000 square meters of space over three 60-floor towers. The first tower will offer 400 rental residential housing units as well as 350 student dormitories. The remaining towers will have 110,000 square meters of office space. There will be 7,000 square meters of commercial space near street level, an underground parking garage for 300 vehicles, as well as public areas for the Ramat Gan Municipality which will be open to all residents of the area, not just the towers.