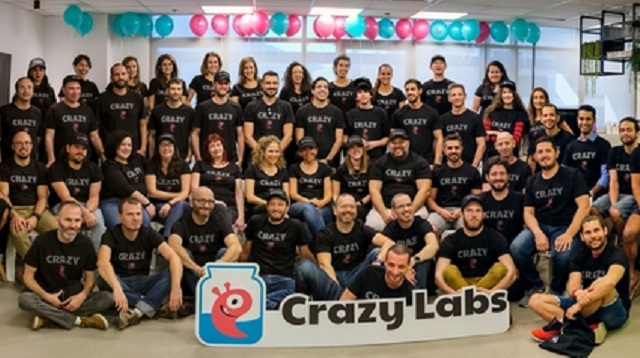 CrazyLabs, an Israeli gaming startup, has been acquired by Sweden’s Embracer Group AB. The purchase price was not revealed. The CrazyLabs management team will remain in their current positions at the company.

The news comes just as CrazyLabs announced its own acquisition of Firescore Interactive, the successful hyper-casual game development studio based in Mumbai, India. CrazyLabs confirmed that this deal is part of CrazyLabs’ strategy to expand in India and grow its game development business as well as its CrazyHubs activity. The terms of the multi-million dollar deal have not been fully disclosed.
–

CrazyLabs is a top 3 mobile games publisher and developer (according to AppAnnie and Sensor Tower). With over 4 billion downloads to date, CrazyLabs is now a worldwide leader in casual and hyper-casual game development, distribution and innovation. Founded in 2011 by CEO Sagi Schliesser, CrazyLabs has offices in China, Macedonia, Germany and Ukraine, and 5 gaming hubs – in India, Israel, Turkey, Serbia and Cape Town.

Embracer Group is the parent company of businesses developing and publishing PC, console and mobile games for the global games market.
“We embrace great people, great companies and great ideas.”
–

We are excited to announce our acquisition of Firescore Interactive! 🥳https://t.co/TvNEWH67KW

“In these exhilarating times for mobile games, we are extremely happy to join forces with the whole Embracer family and the DECA Group in particular. We are confident that this is a jump forward for CrazyLabs on our journey of becoming the top publisher and developer of casual and hyper-casual games and anticipate in excitement what’s yet to come!” Says Sagi Schliesser, CEO CrazyLabs Ltd

“Crazylabs is exactly the type of company Embracer wants to join forces with. Sagi and team are extremely talented, driven and long-term oriented. They have over a decade of success and have proven that they can adapt and succeed in an ever-evolving environment of mobile games. Crazylabs has an exciting growth plan and their publishing capabilities will further strengthen the mobile ecosystem within Embracer,” says Lars Wingefors, co-founder and Group CEO of Embracer Group.