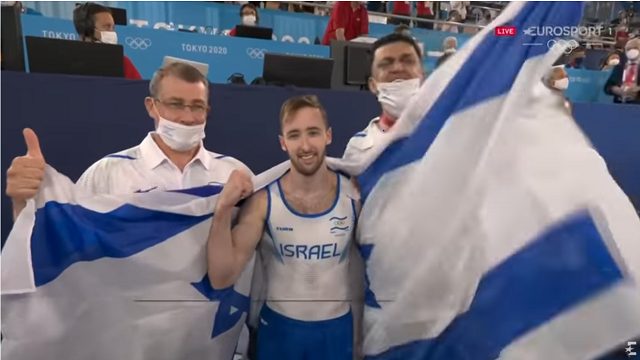 Artem Dolgopyat brought Israel Olympic gold today with his victory in the men’s gymnastics floor exercise competition. It is the second time Israel has ever won an Olympic gold medal. The first time was in Athens in 2004 when Gal Fridman won for Men’s sailboard.

The victory comes after several disappointments for Israeli whose athletes came up short in swimming and judo competitions.

Dolgopyat immigrated to Israel with his family from Ukraine at age 12. He is a two-time world championship silver medalist.
–

Dolgopyat told reporters after the win that he was speechless. “I’m still in the sky and it’s hard to come down. I just want to thank everyone. I love you all.”

“When I saw that my score wasn’t very high, I was worried,” The gymnast said explaining that he did not think that his performance was good enough for a win “I didn’t do my best routine and I was worried it wouldn’t be enough for a medal,” said Artem Dolgopyat. “But everyone else was nervous and made mistakes and it was enough.”

Israel’s Prime Minister Naftali Bennett interrupted a Cabinet meeting when he heard the news so that he could call Dolgopyat. “You made history and brought us tremendous pride,” Bennett told the gymnast. “We interrupted the cabinet meeting in the middle to congratulate you for bringing this great news. On behalf of the Government of Israel and on behalf of the citizens of Israel – we are all proud of you and look forward to your return to Israel to celebrate. Thank you very much and good luck.”