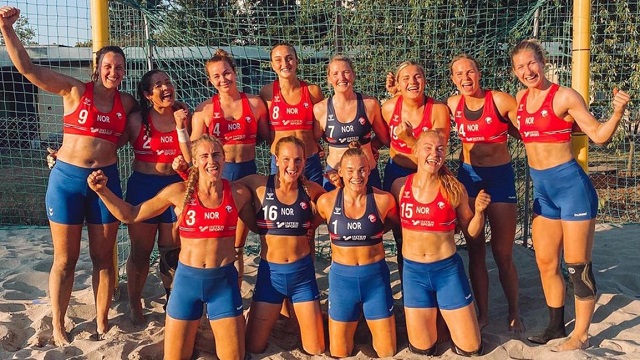 Popstar Pink has stepped up to defend the Norwegian Women’s handball team. Pink announced that she would personally pay the fines levied against Norwegian women’s beach handball team for not adhering to the strict dress code for their uniforms.

Pink’s mother is a Jewish nurse, born Judy Kugel. She self-describes as an “Irish-German-Lithuanian-Jew”, but does identify as Jewish.
–

The European Handball Federation imposed a $1,770 fine on the team for wearing “improper clothing” in the bronze-medal game against Spain during the European Beach Handball Championships in Bulgaria. This comes to $177 per player. The federation stated that the team’s shorts were “not according to the athlete uniform regulations.” To this, Norway’s minister for culture and sport, Abid Raja, responded that the ruling was “completely ridiculous”.

Many have called the Olympic uniform policies sexist. They are certainly revealing. One would expect to see a Victoria’s Secret model dress that way, not a serious athlete. Just compare the skimpy uniforms that the women must wear in many sports, such as handball and volleyball, to those worn by men. The men are allowed to wear shorts, whereas the women must wear bikini bottoms.
–

Check out my never before seen performance of “Who Knew” live from Wembley Stadium! Listen in 360 Reality Audio on the Artist Connection app #360RA https://t.co/dE05MmlenF pic.twitter.com/xrTQkMG8E5

With television ratings being crucial to bringing in the money needed to make any sport profitable, it is no wonder that the officials would want the women to dress provocatively. Professional sports associations, like in golf and tennis, have long claimed that the women get paid much lower prizes for winning competitions because they bring in less money. But does that justify turning the athletes into sex objects.

“I’m VERY proud of the Norwegian female beach handball team FOR PROTESTING THE VERY SEXIST RULES ABOUT THEIR “uniform”,” tweeted Pink. “The European handball federation SHOULD BE FINED FOR SEXISM. Good on ya, ladies. I’ll be happy to pay your fines for you. Keep it up.”

The Norwegians expressed their gratitude on Instagram saying, “We are the Norwegian Handball Federation and we stand behind you and support you. We will continue to fight to change the international regulations for attire, so that players can play in the clothing they are comfortable with.”