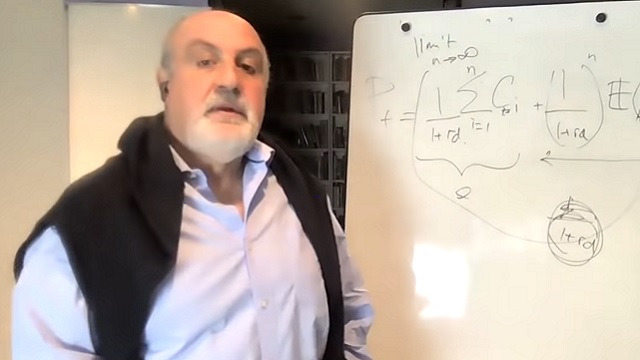 Nassim Taleb, the world renowned author of “The Black Swan,” is no fan of Bitcoin or any cryptocurrency. He said so in a paper which was recently published by the Tandon School of Engineering at New York University. Interestingly, Nassim Taleb had previously been more positive about cryptos.

Everybody is down on Bitcoin and currencies these days and with good reason. Bitcoin is plummeting. And it has seen highly volatile fluctuations in recent months. There is a reason why Warren Buffet dismissed as nothing more than a fad.

“Few assets in financial history have been more fragile than bitcoin.”

=
Nassim Taleb wrote that currently, in spite of hall of its hype, Bitcoin has, In its current version, in spite of the hype, bitcoin has “failed to satisfy the notion of “currency without government” (it proved to not even be a currency at all), can be neither a short nor long term store of value (its expected value is no higher than 0), cannot operate as a reliable inflation hedge, and, worst of all, does not constitute, not even remotely, a safe haven for one’s investments, a shield against government tyranny, or a tail protection vehicle for catastrophic episodes.”

These are all of the things that crypto enthusiasts site as the benefits of cryptocurrencies. “Why trust the Dollar any more than a crypto,” they say. As we all know, something is only worth what people are willing to pay for it so if Bitcoin and the rest are valued at however much in Dollars then that must be what they are worth. Right? And it also serves as a hedge against inflation and political instability, not? So Nassim Taleb now rejects all of this.

Taleb also slammed Bitcoin enthusiasts for misunderstanding its successes. The Black Swan author said that they tend to conflate the success of a payment mechanism, which Taleb says has failed so far, with the “speculative variations in the price of a zero-sum maximally fragile asset with massive negative externalities.” Nasem Taleb covers the history of different commodities and explains why Bitcoin does not meet the necessary requirements to genuinely count as one.

“Going through monetary history,” shows Taleb, “how a true numeraire must be one of minimum variance with respect to an arbitrary basket of goods and services.” A numeraire is an economic term of which refers to something as a benchmark for comparing, such as gold and silver.