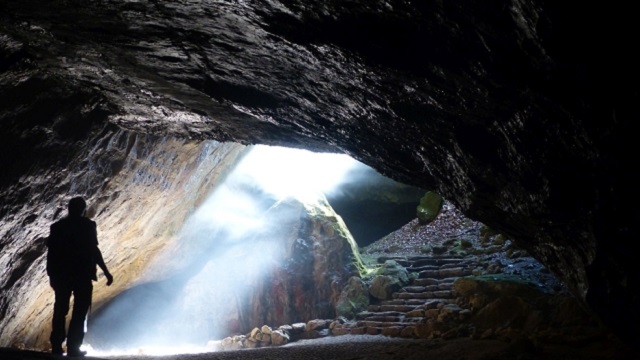 An animal bone carved by Neanderthals was discovered in the “Unicorn Cave” (Einhornhöhle) in northern Germany’s Harz Mountains. The foot bone is 51,000 years old. Now scientists are saying that the bone is giving them new insights into how the Neanderthals lived. German researchers published their study of the Neanderthal bone in the Journal Nature Ecology & Evolution.

After years of work a group of scientists unearthed well-preserved layers of cultural artefacts from the Neanderthal period in the cave’s ruined entrance area. The foot bone is described by the scientists as a sensational discovery. After cleaning the bone scientists found markings which they say are engraving made by Neanderthals. This may have been an early attempt at art, or some sort of ornamentation.

To make a scientific comparison, the team carried out experiments with the foot bones of today’s cattle. They showed that the bone probably had to be boiled first in order to carve the pattern into the softened bone surface with stone tools and the work would take about 1.5 hours. The small ancient foot bone that had been discovered was identified as coming from a giant deer (Megaloceros giganteus). “It is probably no coincidence that the Neanderthal chose the bone of an impressive animal with huge antlers for his or her carving,” says Professor Antje Schwalb from the Technical University of Braunschweig, who is involved in the project. 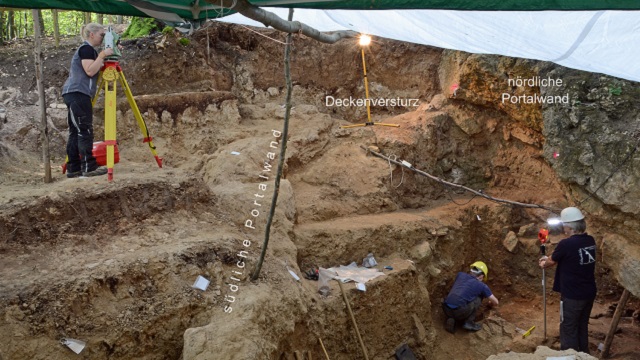 “We quickly realized these were not marks made from butchering the animal but were clearly decorative,” excavation leader Dirk Leder of the Lower Saxony State Office for Heritage said in a statement. Leder and a team of other German researchers detail their discovery in a study published Monday in the journal Nature Ecology & Evolution.

The team of Leibniz laboratory at Kiel University dated the carved bone at over 51,000 years using radiocarbon dating technology. They say that this is the first time that anyone has successfully directly dated an object that must have been carved by Neanderthals. The scientists have also pointed out that only a few ornamental objects from the time of the last Neanderthals in France were known. However, these finds, which are about 40,000 years old, are considered by many to be copies of pendants made by anatomically modern humans because by this time they had already spread to parts of Europe. Decorative objects and small ivory sculptures have survived from cave sites of modern humans on the Swabian Alb in Baden-Württemberg and these were found at about the same time.

“The fact that the new find from the Unicorn Cave dates from so long ago shows that Neanderthals were already able to independently produce patterns on bones and probably also communicate using symbols thousands of years before the arrival of modern humans in Europe,” says project leader Professor Thomas Terberger from Göttingen University’s Department for Prehistory and Early History, and the Lower Saxony State Office for Heritage. “This means that the creative talents of the Neanderthals must have developed independently. The bone from the Unicorn Cave thus represents the oldest decorated object in Lower Saxony and one of the most important finds from the Neanderthal period in Central Europe.”