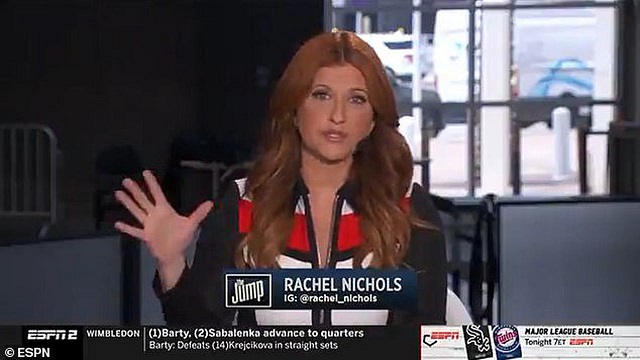 ESPN sportscaster Rachel Nichols has been in the hot seat ever since a video emerged in which she was heard making negative comments about fellow sportscaster Maria Taylor. The New York Times revealed on Sunday that Nichols could be heard in the video complaining that Taylor, who is black, was only made a host of ESPN’s “NBA Countdown” instead of Nichols because Taylor is black. Now ESPN has taken action, sidelining Rachel Nichols from the network’s coverage of the NBA finals.

The news comes after Rachel Nichols apologized to Maria Taylor on air today, Monday. “So the first thing they teach you in journalism school is don’t be the story. And I don’t plan to break that rule today or distract from a fantastic Finals,” Nichols said in the opening of the ESPN 2 show “The Jump.” “But I also don’t want to let this moment pass without saying how much I respect, how much I value our colleagues here at ESPN. How deeply, deeply sorry I am for disappointing those I hurt, particularly Maria Taylor, and how grateful I am to be part of this outstanding team.”
–

Rachel Nichols is married to Max Nichols, whose father was the legendary Jewish film director Mike Nichols. Rachel and Max were married in a Jewish ceremony in Venice in 2001.

The brouhaha over Nichols’ comments went on largely behind the scenes, that is until the NY Times reported on it. Now ESPN released a statement saying merely “We believe this is the best decision for all concerned in order to keep the focus on the NBA Finals.”

So what exactly did Rachel Nichols say? In the video, recorded a year ago accidentally by an ESPN camera which had not yet been turned off, Rachel Nichols can be heard telling a friend, “I wish Maria Taylor all the success in the world, she covers football, she covers basketball. If you need to give her more things to do because you are feeling pressure about your crappy longtime record on diversity — which, by the way, I know personally from the female side of it — like, go for it. Just find it somewhere else. You are not going to find it from me or taking my thing away.”

Rachel Nichols also said that she wished ESPN had found Maria Taylor a different position. “I just want them to go somewhere else — it’s in my contract, by the way; this job is in my contract in writing,” added Nichols.

These comments have made Rachel Nichols somewhat of a hero among political conservatives in America. But to people on the left, her comments might be considered racist. Now that Nichols has been sidelined, she will definitely become a hero to all of the people in America who are fed up with what has become known as “cancel culture.”