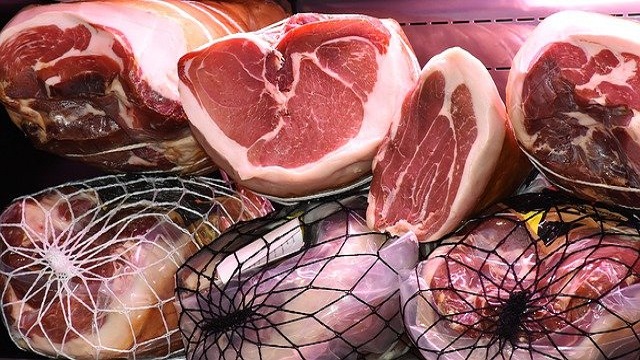 MeaTech 3D is an international company developing a suite of advanced manufacturing technologies to produce alternative protein products. Their technologies are focused on producing cell-based beef, chicken and pork, and enhancing plant-based foods with real meat, with a particular focus on the development of high-throughput bioprinting systems to produce premium, center-of-plate meat products, such as steak.
–

Starting in the 1980s, American Jews were treated to more and ore products going kosher. This was because of the switch from animal fats to vegetable oils used in production by the food industries. Famous brand names like Oreo were finally made kosher. And now Jews who keep kosher can get to have real cheeseburgers and even real pork products, so to speak.

A popular Jerusalem restaurant offers a kosher bacon which they cure themselves from lamb’s meat. But recently they were forced to change the name of their meat from “bacon” to “fake bacon.” Why? Well believe it or not it was because of the local rabbinate’s kosher certification department. One would think that a regulatory agency and step in to say that only meat from a pig could legally be called bacon. But, not, it was the rabbi who made the restaurant change the name on the menu because he felt that it would confuse people as to whether or not bacon is really kosher, or something like that.

But one wonders what he would have said about cultivated meats? Could there be kosher bacon and ham on the menu if they are made from 3D printing technology based on meat cultures? Rabbis have already given the green light on calling such meats kosher. And not only that, they are considered parve – neither meat nor dairy – so observers of kashrut can eat these meats together with either. Kashrut prohibits the mixing of any meat and dairy together.
–

And Israeli firms are not just making fake pork. Startup Nation has several firms offering artificial meat through the wonders of 3D printing. Redefine Meat is one such startup. Established in 2018, Redefine Meat applies its proprietary 3D printing technology, meat digital modeling, and advanced food formulations to produce animal-free meat with the “appearance, texture and flavor of whole muscle meat.”

Sharon Fima, CEO of MeaTech, commented, “Our goal is to lead the upcoming agricultural revolution by making tomorrow’s meat safe, plentiful and sustainable. MeaTech is developing a broad range of cultured meat technologies, developing potential alternatives to conventional factory farming of beef, chicken and now, pork. We believe that offering additional cultivated meat product lines can widen our addressable markets, generating additional revenue potential. Our goal is to be similar in all respects to livestock-farmed pork, while offering a significantly more sustainable and slaughter-free production method.”