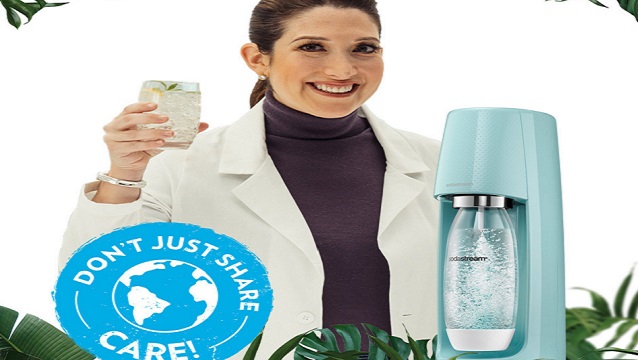 Randi Zuckerberg is an entrepreneur, investor, bestselling author, award-winning producer and founder and CEO of Zuckerberg Media. Passionate about the intersection of tech and media, Randi was an early employee at Facebook where she was the creator of Facebook Live. She currently hosts a weekly tech business show on SiriusXM called Randi Zuckerberg Means Business, and her TV show DOT.

SodaStream will also switch to metal its flavor bottles starting at the end of this year, thus avoiding another 200 million plastic bottles.

SodaStream announced they are developing sparkling water makers from recycled or plant-based material for the first time, taking their commitment to the planet to their core category and thus making their entire portfolio greener.

This #EarthDay we urge you to take action to help our planet! Want to help us in reducing 78 BILLION single-use plastic bottles by 2025? Consider switching to SodaStream to help us on our mission. What are you doing to help our planet? TWEET us! pic.twitter.com/dv5TmBYS3P

SodaStream plans to meet 10% of their global plant’s total energy requirements with solar energy by 2022 a five-fold increase from 2% in 2020.

Through these investments, SodaStream contributes to PepsiCo’s goal of transitioning to 100% renewable energy for company-owned operations globally by 2030. In addition, PepsiCo has pledged to achieve net-zero emissions by 2040, one decade earlier than called for in the Paris Agreement.

SodaStream’s Fizzi Starter Kit and Duo Starter Kit have been certified as reducing carbon by the Carbon Trust. This certification demonstrates SoadStream’s continued commitment to the environment and sustainability. The certification has allowed SodaStream to identify key areas in its products’ value chain where it can take action and reduce its overall carbon footprint.