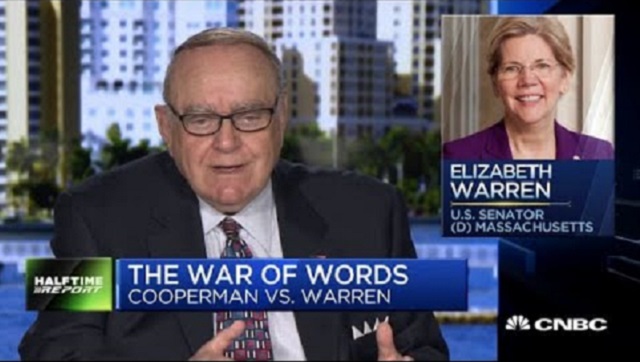 Billionaire Leon Cooperman is a known critic of Senator Elizabeth Warren’s. In spite of this fact, the Senator wanted him to testify before her committee. But Mr. Cooperman declined the invitation to appear before a Senate Finance subcommittee hearing.

The two have clashed in the past. This time their kerfuffle is over Senator Warren’s Ultra-Millionaire Tax – a proposed new tax on the wealthiest 0.05% of Americans.

In her letter of invitation Senator Warren wrote that the hearing would be an opportunity for Leon Cooperman to share his views on how to strengthen the nation’s tax system and to, “address economic inequality, raise revenues to fund critical pro-growth investments in families and communities, and bolster our long-term fiscal and economic outlooks.”

“I am particularly interested in providing you with an opportunity to discuss my Ultra-Millionaire Tax Act,” explained Warren, “which would level the economic playing field and narrow the racial wealth gap by asking the wealthiest 100,000 households in America, or the top 0.05%, to pay their fair share.

The Senator explained that The Ultra-Millionaire Tax would raise at least $3 trillion in revenue over 10 years. She stated that it would do so without raising taxes on the 99.95% of American households that have net worth below $50 million.
–

Cooperman explained his reasons for opposing the Ultra-Millionaire Tax in a letter to CNBC.

“As I have stated many times before (including in my Open Letter to Senator Warren), I believe in a progressive income tax,” Cooperman wrote. “Personally, I am happy to work six months of the year ‘for the government’ and six months for myself. But many who live in high-tax cities and states already pay even more than the 50 percent combined effective rate that that implies, and at some point, higher effective rates (federal, state, and local combined) become confiscatory, which should never be the ethos of this country.”

As for why he would not appear before the Senate sub-committee, Cooperman said that he was skeptical about the Senator’s intentions. “I’m trying to determine whether she’s being objective or whether she’s just trying to promote her own agenda,” Cooperman told CNBC in a statement. “I’m a bit suspicious given how she never responded to the letter I sent her before.”
–

Leon, you were able to succeed because of the opportunities this country gave you. Now why don’t you pitch in a bit more so everyone else has a chance at the American dream, too? https://t.co/OODIM7RcRn

This is not the first time that the two have clashed, however, A few years ago Senator Warren took to Twitter to criticize Cooperman’s opposition to higher taxes on the rich.

The 77 year old Cooperman was born to a Jewish family in the Bronx. He began his career as an investor at Goldman Sachs, where he worked for 25 years.