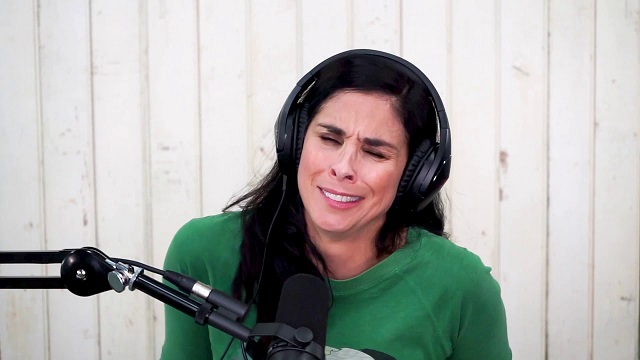 Sarah Silverman has a podcast, and so does everybody else in the world. On her podcast she asked non-Jews to “Stop rolling your eyes and be our allies!” She also talked about how an open mouthed kiss once got her fired from a TV show. Oh yah, she’s also selling her West Hollywood condo for $1.8 million.

So where to begin?

Well as for the kiss, the comic/actress talked about it in an interview with the Hollywood Reporter. Apparently her kissing style got her fired from the 90s sitcom “Pride & Joy” before it ever even aired. Silverman was originally cast as the wife opposite Craig Bierko’s husband in a paint by numbers sitcom for NBC.

It was her first scripted TV show and she got the part just after getting fired from her one year stint on Saturday Night Live. Apparently, Silverman’s lack of TV acting experience cost her as she did not know what the proper way to kiss on a sitcom was.

“I just fully did an open-mouth tongue kiss every time. I didn’t know better and nobody said anything!” explained Silverman. She thinks that the producers just fired her because it was easier than teaching her the right way to kiss on a family show. Well “Pride & Joy” only lasted six episodes and no one remembers the actress who replaced her on the show. According to IMDB, Sarah Silverman, however, has 116 different acting credits to date including her own successful comedy TV show so it looks like she literally got the last laugh.

So what did she say about non-Jews?

Well on her podcast recently Silverman lamented overhearing a seemingly anti-Semitic comment made by a non-Jewish comment in relation to the Covid vaccine. The person said, “ All Jews already have vaccines because they know people.” Sarah Silverman recounted that, “Everyone laughed and no one had a problem with it — and she’s not Jewish, that’s key. And I was like what the actual f—k, man? Just these tiny, little, not so micro aggressions lately.”

This, Silverman explained, was an example of how Americans think that Jews do not suffer from discrimination or bigotry today. But they do and stereotypes of Jews being rich and powerful are a part of the propaganda used by nazis during the Holocaust. “The conceit that Jews are rich is why the Holocaust happened,” she said. “That was the idea they were pushing that got people on board with Nazism.”

So she called on liberal non-Jews to “Stop rolling your eyes and be our allies! Who is here for us? Besides, you know, disingenuous pro-Israel evangelicals who need Jews to go back to Israel for the end days so they can go to heaven?”

As for her home, apparently the 50 year old is looking for a change of pace to spend her time in with her new boyfriend.

The single family home has two bedrooms and two bathrooms over 1,607 sq. f.t on 1.02 acres of land. It is in a facility which offers a brand-new rooftop pool and clubhouse completed this Summer with fantastic city views, valet parking, 24-hour concierge service, gym, and tennis court.

According to the listing by Cory Weiss of Douglas Elliman the house is an, “artfully designed and decorated unit in the famed Empire West. This updated modern home has a versatile floor plan with gracious sized rooms for entertaining – phenomenal grand updated chef’s kitchen with custom cabinetry and tile and top of the line appliances. The enormous primary bedroom has custom woodwork and a full-size dressing room with custom closets and an updated hotel-like marble bathroom. A custom paneled screening room or home office can also serve as a second bedroom suite.”

As no one will ever accuse Sarah Silverman of being at a loss for words there will probably be plenty more to write about her basically forever.

In this article:Finance, Sarah Silverman