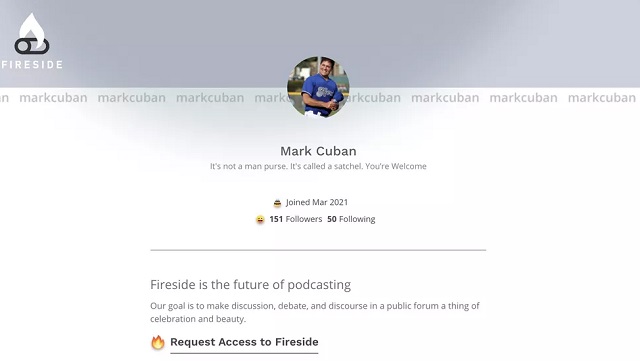 Fireside is Mark Cuban’s new podcast venture. The new app is moving into beta testing and has been reviewed by a number of people. At the same time, Mark Cuban has announced that his NBA team the Dallas Mavericks will accept cryptocurrency in payment for tickets.

Since declaring last week that the Dallas Mavericks would accept Dogecoin in payment for tickets and team merchandise, the team now boasts that it is the largest merchant of the cryptocurrency in the world. Mark Cuban tweeted on Saturday that in only two days his team had conducted more than 20,000 Dogecoin transactions.

The Tweet read, “The @dallasmavs have done more than 20,000 #Dogecoin in transactions, making us the LARGEST #DOGECOIN MERCHANT IN THE WORLD ! We thank all of you and can only say that if we sell another 6,556,000,000 #DOGECOIN worth of Mavs merch, #dogecoin will DEFINITELY HIT $1 !!!”

Mark Cuban explained his decision to have the Mavericks accept cryptocurrency, in spite of having been a blockchain skeptic in the past, in a statement. The reason, he said, was “one very important, earth shattering reason, because we can! Because we can, we have chosen to do so. We have chosen to do so because sometimes in business you have to do things that are fun, engaging and hopefully generate a lot of PR.”

He also tweeted, “To all you people getting all excitable about #Doge. Relax. It’s Fantasy Sports for Crypto. It’s fun to play with. The communities that have been built around it are fun. Like Sports, Fantasy or Otherwise, some people go overboard. It Happens. Be Young. Have Fun.”

It’s not clear what the team will do with the cryptocurrency. Will they hold onto it as an investment, or just sell it off for the dollars? And would this constitute an SEC violation should Mark Cuban invest in cryptocurrency services firms.

As for Fireside, the new podcast app was founded by Mark Cuban together with Falon Fatemi. It describes itself as a socially responsible social platform whose goal is to make discussion, debate, and discourse in a public forum a thing of celebration and beauty. It’s described as a cross between Spotify’s Anchor software and Clubhouse.

Don’t bother trying to see it yet. The app is only available in beta testing to invited parties. It’s not clear how to become someone worthy of the invitation. There is also no word yet as to when people can expect Fireside’s official launch.