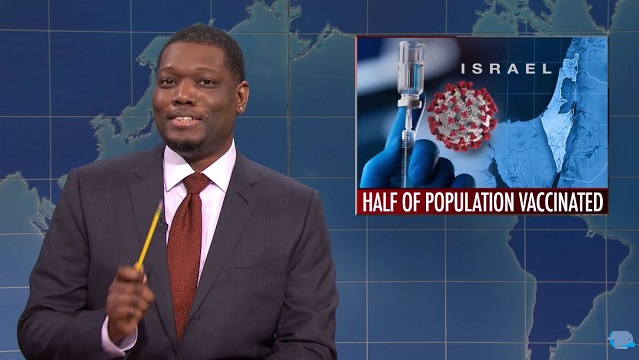 Saturday Night Live’s Michael Che made a really bad joke on last week’s show. It was also an attack on Israel based on a lie. So what else is new? But he has yet to be canceled. This is probably because most American Jews in Hollywood, who would not hesitate to call for the cancel of a Jew who said something offensive against Arabs, are not such big supporters of Israel.

In fact, no one is calling for Che’s head. There are just a few groups demanding an apology, that s all. Maybe that is because when you have thick enough skin then you do not fear people making stupid comments.

So what did Che say exactly? Well as you probably know by now he said on the SNL news, “Israel is reporting that they’ve vaccinated half of their population, and I’m going to guess it’s the Jewish half.” We won’t waste time explaining how Israel has not in any way denied access to the Coronavirus vaccine to its non-Jewish citizens. And besides, the so called joke just wasn’t funny.

But this so called controversy is nothing compared to the cultural appropriation which Jews have suffered through over the years.

Just recently I heard a famous non-Jewish actor (I won’t say who because this is not about outing people) use the word “Chutzpah” in an interview. However you spell it, or pronounce it, hutzpah, chutspa, etc., this is clearly a Yiddish word. I cringe every time I hear a gentile use Yiddish words and expressions like “Ganif,” “Schnorer,” and “Schlemiel.” It even annoys mean when one goes “Oy!”

These are clearly Jewish words and expressions. People from other cultures should not be using them.

And it’s the same thing with food and music. No eating blintzes, gefilte fish, bagels with cream cheese or deli meats on rye with mustard if you are not a Hebrew. No listening to the Fiddler on the Roof soundtrack or going out for Chinese food on Christmas Eve if you are not a certified Semite. 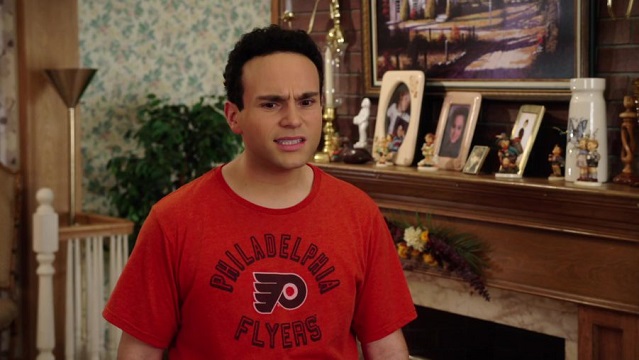 And why stop there? The Simpsons recently brought in new black actors to play the voices of black character like Carl and Dr. Hibbard. They were previously played by the Jewish actors Hank Azaria and Harry Shearer.

Hollywood has now pledged that only trans actors will play trans parts. Well what about Jews?

Just look at the hit TV sitcom The Goldbergs. It’s about a Jewish family, but none of the three kids on the show are played by Jews. The lead character, Adam Goldberg who is based on the real life creator of the show of the same name who is Jewish, is played by Sean Giambrone. He’s an Italian-American with no Jewish ancestry at all.

An as if that I not enough, the older brother Barry Goldberg is played by Troy Gentile, the son of an Iranian immigrant and an Italian-American. And his name is Gentile for crying out loud!

So forget canceling people. Let’s cancel cancel culture. Unless someone says something really anti-Semitic like asking why if Israelis are so tough then how come American Jews are so whiny? I mean, just compare a Jerry Seinfeld or a Charles Schumer to a Gal Gadot or an Ariel Sharon.

Come to think of it… Maybe we should just cancel the canceling of cancel culture already. Well if Esther and Mordecai could take down Haman in Shushan then anything is possible. Happy Purim everybody.