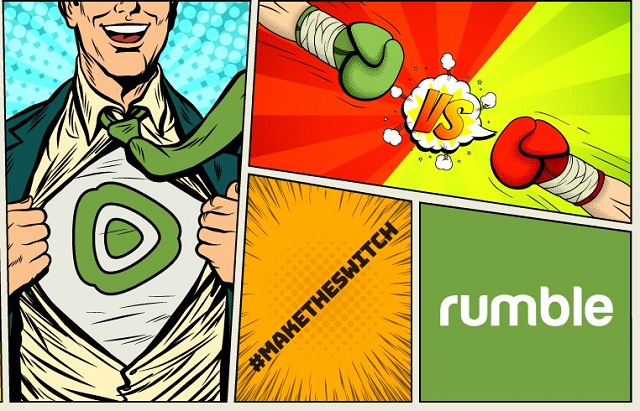 Rumble, a video service platform which competes with YouTube, has filed a lawsuit in California against YouTube’s parent company Google for $2 billion. Rumble accuses Google of engaging in monopolistic activities to block competition.

Specifically, Rumble charges that Google is “unfairly rigging its search algorithm” to the benefit of YouTube.

If you think about it, how many people use video services other than Google? How often to you see other options when searching for your favorite music or movies available for free? And had you even heard of Rumble before reading this article?

Based in Canada, Rumble.com is an open video platform that holds rights management technology. It explains that this rights management technology is a machine learning DRM algorithm called Rumble Rank, which automatically scales verification, clearance, discovery and licensing for social (UGC) video. Rumble provides video creators a way to host, manage, distribute and create OTT feeds while monetizing their content.

The new lawsuit alleges that Google gives preference to YouTube in video searches, thereby stamping out the competition.

“Google, through its search engine, was able to wrongfully divert massive traffic to YouTube, depriving Rumble of the additional traffic, users, uploads, brand awareness and revenue it would have otherwise received,” the complaint said.

Video-sharing site Rumble accused Google in a lawsuit of abusing the power of its search engine and mobile operating system to boost its YouTube video service over rivals https://t.co/QJEsa1GV6Z

Rumble’s lawsuit cites data about the viewership of its original content videos on YouTube. The company states that this data shows that Google wrongfully directed 9.3 billion views that to YouTube which would have gone to it. This cost it a tremendous amount of possible revenue which it could have collected.

“If even a portion of those 9.3 billion views had occurred on Rumble’s website instead of YouTube, that would have generated well in excess of 100 million additional video uploads to the Rumble platform, which in turn would have generated billions of more views on the Rumble platform, and massive amounts of additional revenue for Rumble and its content creators,” Rumble states.

“This also has damaged and continues to damage Rumble by further self-preferencing YouTube over Rumble (and other platforms, which harms competition in addition to Rumble),” the company added. “Because much of the online searching for videos is done on smartphones, this further ensures that Google’s YouTube platform receives unfair preferential treatment. Google thus wrongfully acquired and maintains a monopoly over the market for online video-sharing platforms.”

Google told The Wall Street Journal, “We will defend ourselves against these baseless claims.”