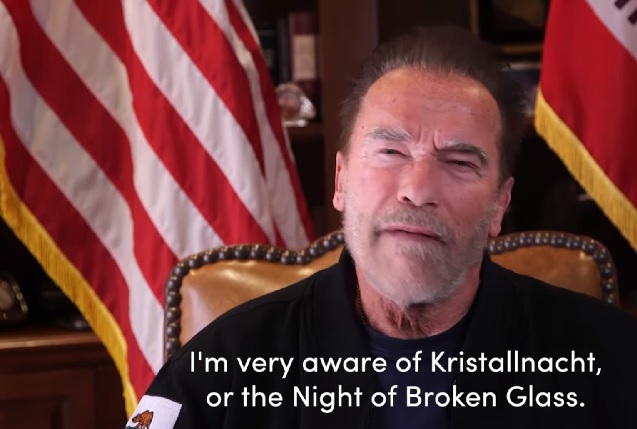 Arnold Schwarzenegger, a former two-term Republican governor of California, has condemned the attack on the U.S. Capitol last week and put the blame for it squarely on the shoulders of President Donald Trump. The actor released a 7 and a half minute video on Twitter in which he went so far as to compare the violence in Washington to Kristallnacht.

Kristallnacht, the Night of Broken Glass, was a nationwide pogrom enacted in Germany against the Jews on the night of November 9, 1938. Many cite this event where Jewish owned stores and synagogues were attacked and burned as the start of the Holocaust.
–

“I grew up in the ruins of a country that suffered the loss of its democracy,” said Arnold Schwarzenegger in the video. “Growing up, I was surrounded by broken men drinking away the guilt over their participation in the most evil regime in history. Not all of them were rabid anti-Semites or Nazis. Many just went along.”

Schwarzenegger’s own father voluntarily joined the Nazi party after Germany annexed his country Austria in 1938.

“America will survive this,” Arnold Schwarzenegger said. “America has survived dark times like this in the past.” https://t.co/FYhvrcM423

But he did not stop there. Mr. Schwarzenegger also expressed his agreement with the widely held belief that President Trump must accept the blame for what happened because of his volatile words to the crowd which assembled for a demonstration before the riot began. The President continued his unfounded charge that the election was somehow “stolen” from him and called on everyone there to march to the Capitol where the members of the Congress were assembled to formally certify the election results.

“President Trump sought to overturn the results of an election and of a fair election. He sought a coup by misleading people with lies,” said Arnold Schwarzenegger. “My father and our neighbors were misled also with lies, and I know where such lies lead.”

The former governor went on to call Donald Trump a failed leader and said that he will go down in history as the worst president ever.

There may, however, be a backlash to Mr. Schwarzenegger’s words. President Trump’s supporters will, of course, be infuriated at being compared to Nazis. And Jewish groups will likely take issue with saying that the attack on the U.S. Capitol was like the Holocaust. That being said, Mr. Trump’s opponents have been charging for the last four years that his incendiary rhetoric has enabled racists and Nazis in America and associate it with the rise in anti-Semitic incidents over that period of time.