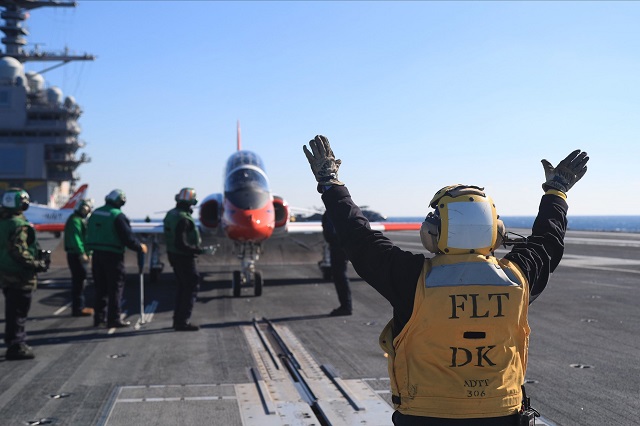 Bloomberg reports that its new high tech type of takeoff and landing systems for aircraft are unreliable and break down frequently. These systems cost American taxpayers $3.5 billion. This is obviously a serious issue for a naval vessel whose entire existence is based on being a floating mobile airport.

The issue here is that the new Ford class ships use an electromagnetic catapult system instead of the traditional steam powered one. The catapult launches a plane into the air by giving it the force needed to achieve lift off. This is necessary because an aircraft carrier does not offer the same length of runway as an air field does and planes need to build up momentum to get off the ground.

The Electromagnetic Aircraft Launch System (EMALS) is a type of aircraft launching system developed by General Atomics for the United States Navy. This type of catapult employs a linear induction motor rather than the conventional steam piston. It weighs less, occupies less space, and requires less maintenance and manpower than the steam powered catapult. It also recharges faster allowing for quicker launching of more planes and needs less energy.

Compared to steam catapults, EMALS can control the launch performance with greater precision, allowing it to launch more kinds of aircraft, from heavy fighter jets to light unmanned aircraft. But that is when they work properly. Critics had expected a high rate of malfunctions.

Its main advantage is that it accelerates aircraft more smoothly, putting less stress on their airframes. Compared to steam catapults, the EMALS also weighs less, is expected to cost less and require less maintenance, and can launch both heavier and lighter aircraft than a steam piston-driven system. It also reduces the carrier’s requirement of fresh water, thus reducing the demand for energy-intensive desalination.

The Ford class features a new nuclear power plant, a redesigned island, electromagnetic catapults, improved weapons movement, an enhanced flight deck capable of increased aircraft sortie rates, and growth margin for future technologies. Each Ford-class ship will operate with a smaller crew than a Nimitz-class carrier and will provide $4 billion in total ownership cost savings for the Navy. Aircraft carriers provide sovereign, mobile U.S. territory and are a visible symbol of U.S. power. They are the centerpiece of our nation’s security strategy and support and protect the global economy through the protection of sea lanes around the world.

Every piece part is created in a 3-D model at full scale which includes structure, various equipment, piping systems, machinery, electrical, wireways, gauges, pumps, berths, medical and galleys. At any given day hundreds of designers, engineers, planners and construction representatives were in the model designing, creating and planning every feature of the ship.