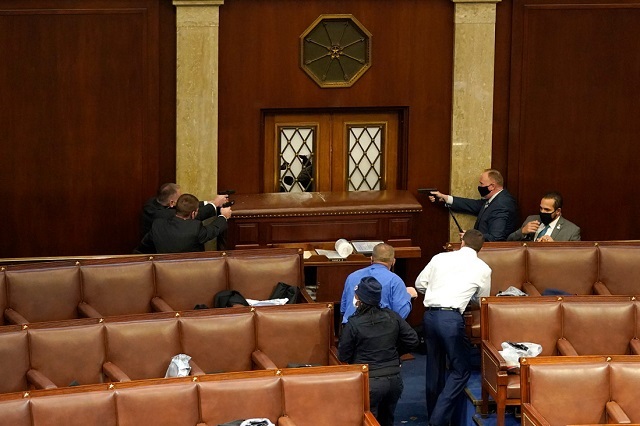 Super model Karlie Kloss, Al Franken, Sacha Baron Cohen, Chelsea Handler and Bette Midler had a lot to say on social media about the assault on the American Capitol committed by a mob of Donald Trump supporters on Wednesday.  Kloss, the wife of Joshua Kushner, and the sister-in-law of Jared Kushner and Ivanka Trump, spoke about Ivanka on Twitter.

Kloss tweeted, “Accepting the results of a legitimate democratic election is patriotic. Refusing to do so and inciting violence is anti-American.

Karlie Kloss was very public in her support for Joe Biden’s campaign last year. He also supports the Black Lives Matter campaign which is reviled by President Trump and his supporters.

For her part all Ivanka Trump had to say about what happened was, “No. Peaceful protest is patriotic. Violence is unacceptable and must be condemned in the strongest terms.”

The host of NBC’s Late Night Seth Meyers was somber on his program Wednesday night.


Meyers said, “I think it’s important, as the first draft of history is being written and as we’re all processing what we witnessed today, to be as plainspoken and clear-eyed as possible. What we saw today was a violent insurgency and attempt to overthrow the legitimately elected government of the United States. And it was incited, directed, and encouraged by the president, Donald Trump, and more than a few members of the Republican Party and right-wing media.”

“What a pile of bull from @VP @Mike_Pence. His boss, for whom he’s been a shameless sycophant, sent the mob to the Capitol.”

“This isn’t on just the 13 Senators who are now challenging the certification. This is on all Republicans who waited more than a month to acknowledge that Biden won. Including @senatemajldr McConnell.”

“Never forget that @tedcruz and @HawleyMO are COUP PLOTTING MOTHERFUCKERS.”

“Trump lost the 2020 election. It’s not an opinion. THE ELECTION WAS FAIR AND TRUMP LOST.”

“These are Domestic Terrorists, staging a putsch IN TRUMP’S NAME… y’all are COUP PLOTTERS, plain and simple. #STOPTHELIE This election was fair and you know it.”

“The president nurtured, encouraged, and manifested A COUP. His VERY FINE PEOPLE came straight to the capitol. IN HIS NAME. GOD SEES YOU.”
–

You don’t have to look inward.

You don’t have to figure out what you need to learn and unlearn.

You don’t need to examine your life!

Just put all your anger HERE⬇️
(But also… sandals?) pic.twitter.com/PLYIBYUf70

“Dear Mitch McConnell, I hope it was worth it. Have a beautiful day, and may the Lord be with you. Love, Chelsea.”
–

“@twitter suspending Trump for 12 hours? Sorry @jack —not good enough. This is your chance to finally defend democracy. Ban Trump from Twitter—for good!”

Is that FINALLY enough for you to act?!

It’s time to ban Donald Trump from your platforms once and for all! pic.twitter.com/4oWoiMu0eC

“The only thing worse than placing party over country is placing your personal ambitions over both.”

“The response to today’s insurrection was a marked difference from the way in which the Trump administration responded to protests over racial injustice last year, in which federal agents in riot gear sometimes showed up in force.”

“From a friend; “They didn’t want to be prepared. They totally let it happen. Come on they’ve been predicting it for a month. If this crowd was black they’d all be dead.”