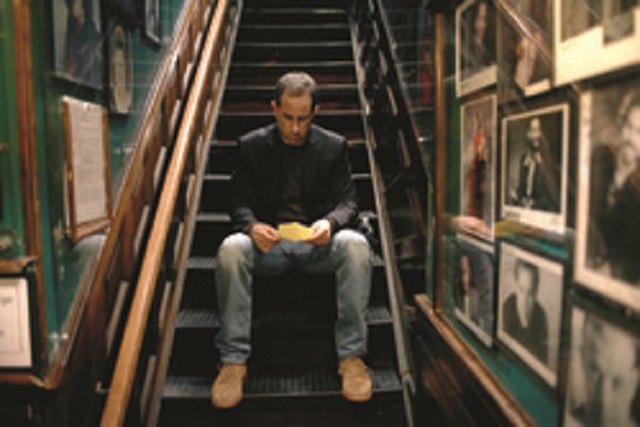 Jerry Seinfeld Is This Anything? Back Cover

America’s favorite comic, now 66, explained how Transcendental Meditation and weight training will “solve just about anyone’s life” in an interview on “The Tim Ferriss Show.”

For those who are not hip to the relaxation practice of the stars, Transcendental Meditation (TM) is a specific form of meditation created in the 1950s by the Maharishi Mahesh Yogi. This meditation practice involves the use of a silent mantra for 15–20 minutes, twice per day, while sitting with your eyes closed. Many today see it as a religious experience, while other of its practitioners say that it simply allows them to relax and rid themselves of dally tensions.

The method was first made prominent in the West when in the 1960s the Beatles made a famous trip to India as a group just to meet with the Maharishi.

But the Beatles eventually became disenchanted with the Maharishi Mahesh Yogi. Paul McCartney and Ringo Starr went back to England early and John Lennon lost faith over the Maharishi’s womanizing. Lennon later wrote the Beatles song “Sexy Sadie” about how disappointed he was with the man’s behavior.
–

I loved catching up with @DavidSpade this week to talk about his ‘guns,’ the San Diego Improv, and ‘Is This Anything.’ https://t.co/ec0MrL68OJ

However, this did not stop the spread of Transcendental Meditation and its popularity among people in the West. It has been practiced by Hollywood celebs and everyday people alike for decades.

Jerry Seinfeld explained that TM helps him with his concentration saying, “As a standup comic, I can tell you, my entire life is concentration fatigue. Whether it’s writing or performing, my brain and my body, which is the same thing, are constantly hitting the wall. And if you have [TM] in your hip pocket, you’re Columbus with a compass.”

As for the weight training, Seinfeld told Tim Ferriss, “There are a lot of days where I want to cry instead of do it because it really physically hurts. But I just think it’s very balancing to the forces inside humanity that I think are just, they overwhelm us.”

Many people roll their eyes when people speak of TM. They look at it as something silly and just for whacky celebs. And weight training can be very difficult. As with any form of excursive a person should do whatever works for them and is recommended by professionals. As for meditation, the same holds true. But just because it works for Jerry Seinfeld does not mean that it will work for you.