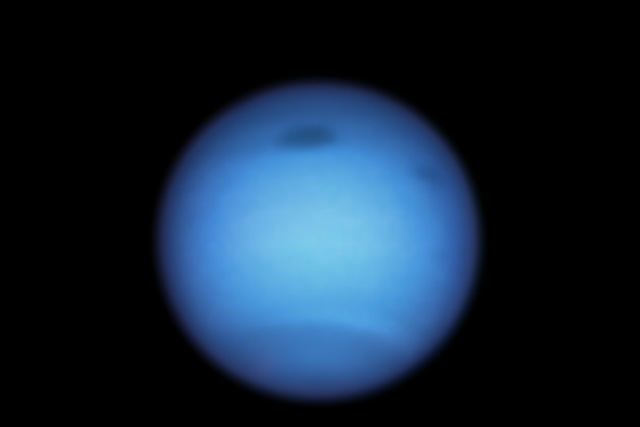 You surely have heard of the famous big dark spot on Jupiter. Well, Neptune has one too and now NASA says that it has reversed course.

The dark spot on Neptune was only just discovered two years ago by the Hubble telescope. According to NASA, the spot is a storm wider than the Atlantic Ocean. It was born in the planet’s northern hemisphere and discovered by Hubble in 2018. Observations a year later showed that it began drifting southward toward the equator, where such storms are expected to vanish from sight.

But astronomers were surprised when Hubble spotted the vortex change direction by August 2020, doubling back to the north. Though Hubble has tracked similar dark spots over the past 30 years, NASA says that this unpredictable atmospheric behavior is something new to see.

The Hubble telescope also spotted another smaller dark spot in January this year which appeared near the larger one. Some speculated that this might have been a piece of the giant vortex that broke off, drifted away, and then disappeared in subsequent observations.

“We are excited about these observations because this smaller dark fragment is potentially part of the dark spot’s disruption process,” said Michael H. Wong of the University of California at Berkeley. “This is a process that’s never been observed. We have seen some other dark spots fading away and they’re gone, but we’ve never seen anything disrupt, even though it’s predicted in computer simulations.” 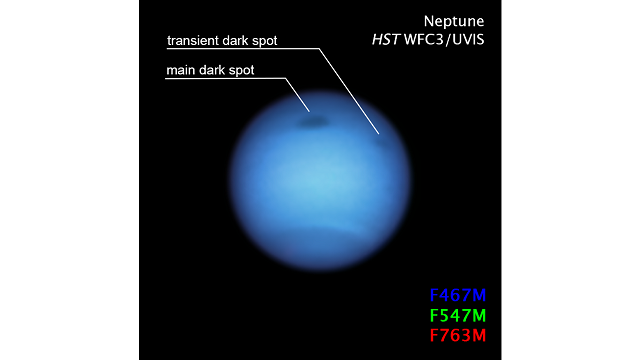 NASA explains that Neptune’s dark vortices are high-pressure systems that can form at mid-latitudes and may then migrate toward the equator. They start out remaining stable due to Coriolis forces, which cause northern hemisphere storms to rotate clockwise, due to the planet’s rotation. (These storms are unlike hurricanes on Earth, which rotate counterclockwise because they are low-pressure systems.)

As a storm drifts toward Neptune’s equator, the Coriolis Effect weakens and the storm disintegrates. In computer simulations by several different teams, these storms follow a more-or-less straight path to the equator, until there is no Coriolis Effect to hold them together. Unlike the simulations, the latest giant storm didn’t migrate into the equatorial “kill zone.”

“It was really exciting to see this one act like it’s supposed to act and then all of a sudden it just stops and swings back,” Wong said. “That was surprising.”