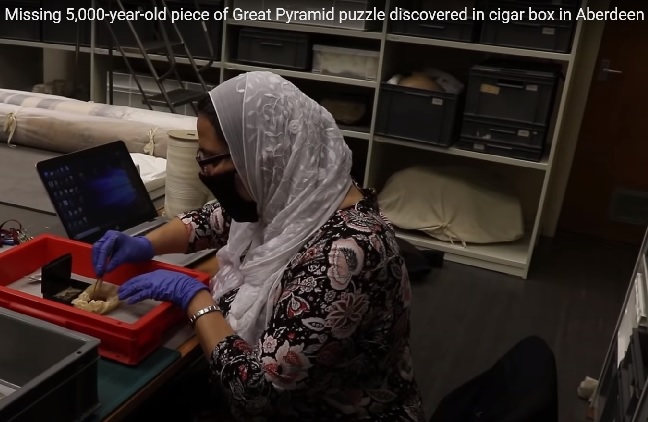 The University of Aberdeen in Scotland revealed that a lost fragment from the Great Pyramid of Giza was found by curatorial assistant Abeer Eladany. The mere piece of wood from the pyramid was found in a cigar box in 2019 when cleaning up its museum’s Asia Collection.

The fragment is one of three discovered inside the pyramid’s Queens Chamber in 1872 by the engineer Waynman Dixon. They collectively became known the “Dixon relics.” Of the three a ball and a hook are held by the British Museum, but the third piece has been missing for 70 years.

“Once I looked into the numbers in our Egypt records, I instantly knew what it was, and that it had effectively been hidden in plain sight in the wrong collection,” she said. “I’m an archaeologist and have worked on digs in Egypt but I never imagined it would be here in north-east Scotland that I’d find something so important to the heritage of my own country.”

But what was the piece of wood used for anyway and why is its discovery so significant? If one theory is correct, the fragment was a measuring rule. If this is the case then it could be used to learn more about the pyramid’s construction.

Carbon dating has shown the wood can be dated to somewhere in the period 3341-3094BC. This would mean that it goes back to the time when the pyramid was first constructed and was not added to it at a much later date.

Neil Curtis, Head of Museums and Special Collections at the University of Aberdeen, said: “Finding the missing Dixon Relic was a surprise but the carbon dating has also been quite a revelation.”

“It is even older than we had imagined. This may be because the date relates to the age of the wood, maybe from the center of a long-lived tree. Alternatively, it could be because of the rarity of trees in ancient Egypt, which meant that wood was scarce, treasured and recycled or cared for over many years.”