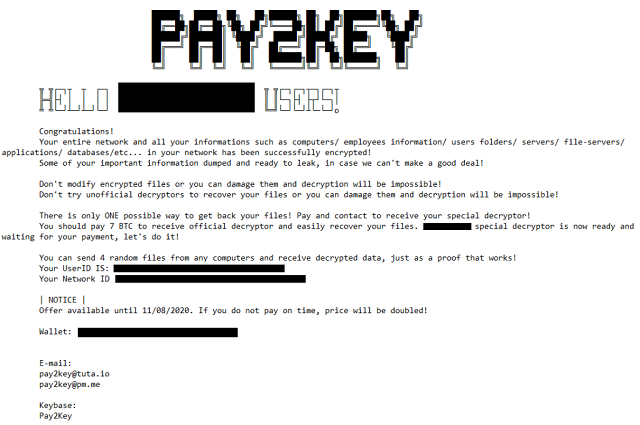 Last month Check Point Software researchers revealed that the Pay2Key ransomware came from Iran. They did so by following the money, watching the bitcoin “wallets” into which ransom paid by some of the victims went.

The same wallets were reused for the ransom payments of different victims. The bitcoins were then transferred to an intermediate wallet and the to a final wallet address associated with a high activity cluster. Check Point used WalletExplorer service to help uncover the location of the final wallet. This led to Excoino which is an Iranian company that provides secure cryptocurrency transactions services for Iranian citizens.
–

IAI is proud to initiate #Beresheet2, Israel’s 2nd spacecraft to the moon. We will extend the boundaries of human knowledge and inspire generations of discovery.

The Pay2Key attacks date back to last June.

A Twitter account called “Winter is Coming (Pay2Key)” has been posting boasts from the hackers. It released the following taunts of IAI on Sunday:

“Knock Knock! Tonight is longer than longest night for @ILAerospaceIAI,”
“IAI might think they have the most protected network, but this should be backed with proof.”

“They thought they had the most protected network, the night will be longer than usual for the aerospace industry.”

“New logo appeared in #Pay2Key directory, check it out!”

Observers says that Israel should not be surprised by the recent hacking attacks against its businesses and government agencies. This is because Israel allegedly engaged in similar attacks against Iran in an attempt to thwart that country’s nuclear development program.