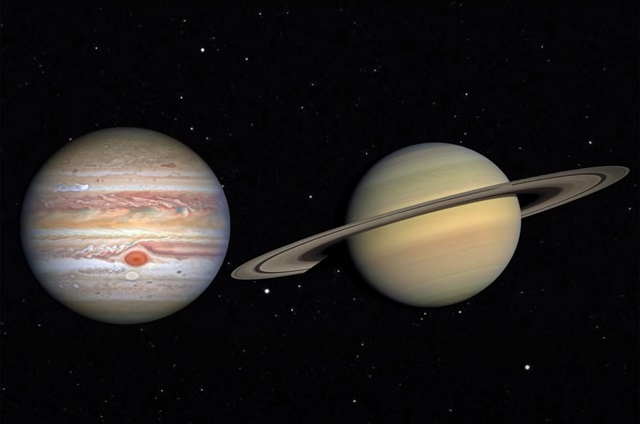 The Great Conjunction, a side by side alignment of Jupiter and Saturn, is to coincide with the Winter Solstice on December 21. NASA has reported that this alignment of the two planets is set to happen for the first time in centuries.

The alignment will culminate on the night of Dec. 21. This will look to the naked eye like a really bright star which has also come to be known as “The Christmas Star.”

It is no coincidence that Christmas is celebrated just after the Winter Solstice: it is the day of the year in which the northern hemisphere has the fewest hours of daylight. While this is not such an important event in more southern areas like the Middle East or Florida, it was a big deal in northern Europe. In Scandinavia, for example, some areas have as little as four hours of daylight this time of year.

The ancient cultures there saw the days getting darker and the sun appearing further away in the sky. So they feared that the sun might actually be dying and that in any given year it would not come back. This led to the Winter Solstice becoming a pagan holiday.

So when in a given year Saturn and Jupiter aligned in this way, creating in appearance a large single star lighting the dark winter skies, it brought hope to people in the north.

According to NASA, the two planets regularly appear to pass each other in the solar system, with the positions of Jupiter and Saturn being aligned in the sky about once every 20 years. But this year is a rarity. It has been 400 years since the last time that Jupiter and Saturn passed this close to each other in the sky, and nearly 800 years since the alignment of Saturn and Jupiter occurred at night.

This will be the case this year and explains why the event has been dubbed the “great conjunction.”

“You can imagine the solar system to be a racetrack, with each of the planets as a runner in their own lane and the Earth toward the center of the stadium,” said Henry Throop, astronomer in the Planetary Science Division at NASA Headquarters in Washington.

“From our vantage point, we’ll be able to be to see Jupiter on the inside lane, approaching Saturn all month and finally overtaking it on December 21.”

“Conjunctions like this could happen on any day of the year, depending on where the planets are in their orbits,” said Throop. 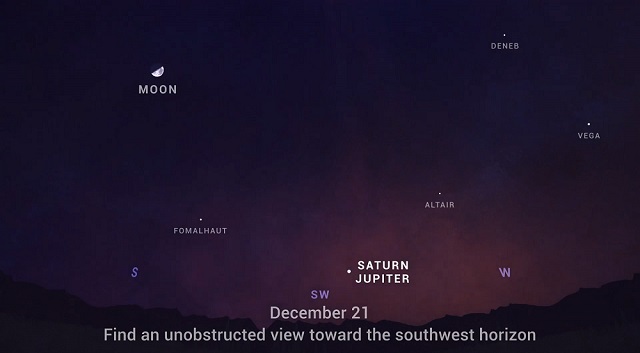 In order to see this phenomenon NASA advises the following:

Find a spot with an unobstructed view of the sky, such as a field or park. Jupiter and Saturn are bright, so they can be seen even from most cities.

An hour after sunset, look to the southwestern sky. Jupiter will look like a bright star and be easily visible. Saturn will be slightly fainter and will appear slightly above and to the left of Jupiter until December 21, when Jupiter will overtake it and they will reverse positions in the sky.

The planets can be seen with the unaided eye, but if you have binoculars or a small telescope, you may be able to see Jupiter’s four large moons orbiting the giant planet.

Each night, the two planets will appear closer low in the southwest in the hour after sunset.