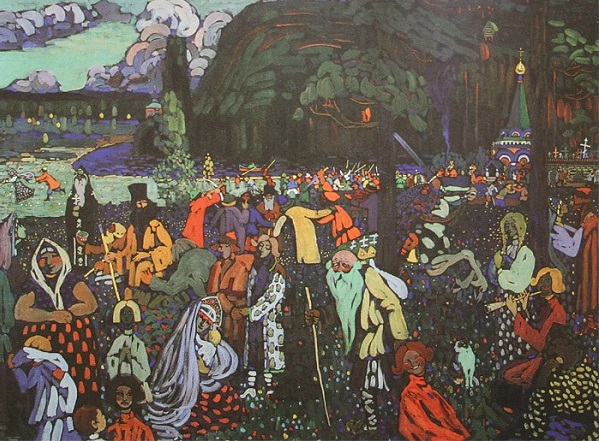 The Lewenstein Family failed again in its bid for the restitution of the Russian artist Wassily Kandinsky’s Bild mit Häusern or Painting with Houses. An Amsterdam court ruled against the family on Wednesday who are heirs of the painting’s original owners. The work by the avant-garde artist, titled Painting with Houses, was sold in October 1940, five months after the German Wehrmacht took over the Netherlands.

Valued at $22 million and looted by Nazis during World War II, the painting is currently held in the Stedelijk Museum in Amsterdam. The court today upheld a 2018 ruling by The Restitution Committee of the Netherlands. That committee had determined that Painting with Houses was jointly owned by Robert Lewenstein and his wife Irma Klein. After World War II when they separated the painting became her property alone, according to the agreement made by the couple, so she was allowed to sell it.

But the Lewenstein Family points out that the painting was originally looted by Nazis during the German occupation of Holland in World War II and was later sold under duress.

James Palmer, a lawyer who represents the Lewenstein Family, condemned the court’s decision and says that the family will appeal it. “If this court decision is left unchallenged then Dutch restitution policy will effectively be non-existent, and important looted art in The Netherlands will likely never be restituted,” he said.

The Stedelijk Museum in Amsterdam describes Painting with Houses (1909) by Russian artist Wassily Kandinsky as one of the most colorful paintings in its collection as well as one of the most remarkable. It says that, “this painting makes the sensation of Kandinsky’s first steps in his pioneering search for a freer, abstract painting almost palpable. After centuries in which painting was primarily the art of representation, what inspired Kandinsky – as one of the first – to strive for abstract, non-representational, art? He himself had several explanations.”