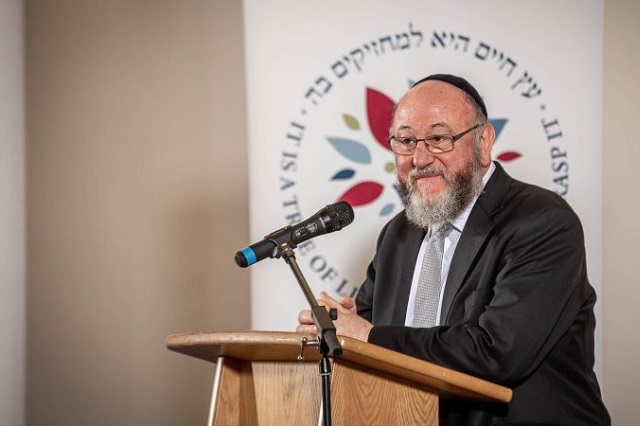 Rabbi Ephraim Mirvis, Chief Rabbi of the United Kingdom and Commonwealth, has spoken out against how the Chinese government treats its Muslim minority citizens. The comments came in an editorial published in England’s The Guardian as a statement for the Hanukkah holiday.

A Rabbi in England comes to the aid of Muslims in China who he sees as persecuted for their beliefs. A Gulf Arab Sheikh from Abu Dhabi bought half an Israeli soccer team, Israelis are flocking to the United Arab Emirates of all places for warm beaches and to escape Corona Virus shutdowns at home, Morocco just established diplomatic ties with Israel and now this. Americans would call it a Christmas miracle.

Rabbi Mirvis spoke specifically about the Uyghurs, a Turkic ethnic group native to the Xinjiang Uyghur Autonomous Region in Northwest China. China as a communist country does not approve of religions which practice openly or proselytize. Then there is the added fear around the world of terrorism committed by Muslim extremists.

The Uyghurs have been living under restrictions imposed by the government of China since 2014. This was done as part of the Chinese government’s crackdowns on religious extremists. Some estimate that more than 100,000 Uyghurs are detained in detention camps termed “re-education camps.”

“Can it be true that, in our modern, sophisticated world, men and women are still beaten if they refuse to renounce their faith?” wrote the British Chief Rabbi about the plight of the Uyghurs in China. “That women are forced to abort their unborn children and are then sterilized to prevent them from becoming pregnant again? That forced imprisonment, the separation of children from their parents and a culture of intimidation and fear have become the norm?”
–

In a year of loss for so many, the Chief Rabbi and the Archbishop of Canterbury discuss their experiences of how to deal with grief.

How do we deal with the sense of emptiness that it leaves? How do we support others through their loss? https://t.co/0TFSMLxSf1 pic.twitter.com/cFWT02fiJT

Chief Rabbi Mirvis tied the oppression to the story of Hanukkah by referencing how the holiday celebrates the victory of the Jewish people over similar religious oppression at the hands of the Greeks more than 2,000 years ago.

The Rabbi also spoke of how he has personally worked to help promote the cause of helping the Uyghurs.

Chief Rabbi of the United Hebrew Congregations of the Commonwealth since 2013, Ephraim Mirvis was born in Johannesburg, South Africa, in 1956. His father was also a rabbi. He previously served as the Chief Rabbi of Ireland between 1985 and 1992.