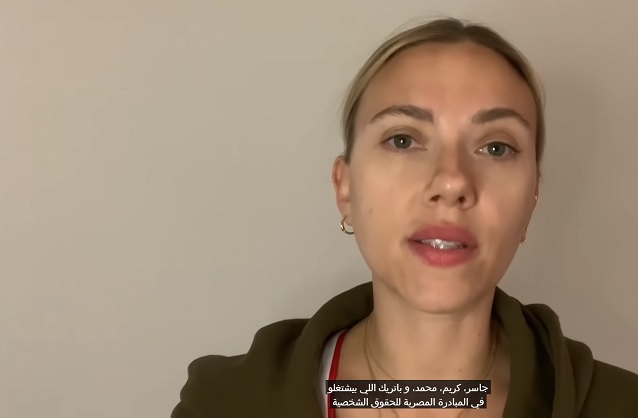 Yes Scarlett Johansson is a Zionist. Well at least her detractors in Egypt think so. This is how they described the Oscar nominated actress after she spoke out in support of four jailed human rights workers in that country.

The people in question work for the Egyptian Initiative for Personal Rights (EIPR) — its executive director Gasser Abdel-Razek, its criminal justice director Karim Ennarah and administrative director Mohammed Basheer and Patrick Zaki. Since the celebrities including Scarlett Johansson began their campaign for the prisoners’ freedom, three of the four detained men were released, Zaki is still in prison.
–

Sending you all a big hug! pic.twitter.com/QnwlEFJMep

OK, so Scarlett Johansson, or ScarJo if you prefer, has been supportive of Israel. Her mother is Jewish and Scarlett did an ad campaign for the Israeli company Soda Stream. So maybe that’s why Egyptian television dismissed as someone who is on Israeli’s side.

She said in the video that, “speaking out in Egypt today is dangerous. I want to highlight the plight of four people wrongfully arrested for their work fighting for the dignity of others, Gasser, Karim, Mohammed and Zaki.”
–

“These men have spent their lives fighting against injustice,” added Johannsson.

“They all face bogus charges that could lead to many more years in prison. In fact, their only crime has been to stand up for the dignity of Egyptians. EIPR has for years worked tirelessly and bravely on the front lines to protect and defend the most vulnerable.”

Scarlett Johannsson went on to talk about each of the four men, calling for their immediate release saying that she was, “in awe of the bravery of these men” for defending other people’s rights and fighting for democracy in Egypt.