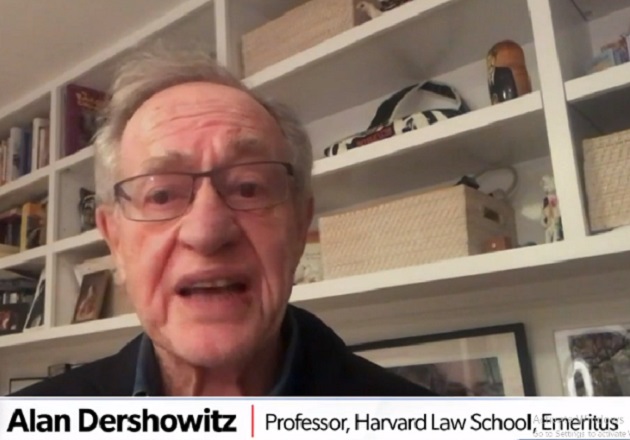 TV attorney Alan Dershowitz is speaking out on the Supreme Court’s decision to reject an attempt by Texas lawmakers to intervene in the Presidential elections results in four other states. The Texans did not like the fact that the four states in question loosened their mail in ballot rules because of the Corona Virus pandemic. These also just happened to vote for Joe Biden over Donald Trump.

The Supreme Court decision was in effect unanimous with justices Just Samuel Alito and Clarence Thomas dissenting only on a matter of whether Texas could seek relief in a dispute with other states. The other seven justices who joined in rejecting the Texas application included all three appointed by President Trump.

Once a highly respected civil liberties advocate, Alan Dershowitz has become somewhat of a caricature of himself over the years, appearing on the television news programs at every opportunity. He famously argued against the impeachment of President Trump by saying that the President could not be removed from office for actions if he truly believed that they were for the good of the country.

Professor Dershowitz was interviewed on the WABC local talk radio channel by John Catsimatidis on his radio program. “The three justices that President Trump appointed, his three justices, voted not to hear the case,” Dershowitz said. “I think it’s a message to him and his team that you can’t count on the judiciary, you can’t count on the courts.”

I CHALLENGE @YouTube TO CENSOR THE DERSHOW.@YouTube took down 8k channels for discussing the issue of possible voter fraud. What happened to the free market place of ideas? Listen on the Dershow. I really want to hear from you. Call me @ 216-710-0050. https://t.co/45VkrD0bB9

He made the same argument on the conservative news channel Newsmax which may as well be called the Donald Trump News Network. ”This Supreme Court decision sends a message,” Dershowitz said. ”The majority included the three justices appointed by President [Donald] Trump, and they all said, ‘We’re not going to hear the Texas case. We’re not going to get involved in this election.’”

”I think this sends a message. It’s not a legal message, but it’s a practical message: the Supreme Court is out of this game.”

So Alan Dershowitz has now acknowledged that the clock has run out on President Trump’s attempts to overturn the election results in the courts.

Just a week ago the same man told Fox News, “There certainly is probable cause for investigating and looking further. The question is which institution is designed constitutionally to look into it. Is it the state legislature? Is it the courts? Is the clock running in such a way that there won’t be time to look into this?”

Mr. Dershowitz also took the position that the state governments could appoint whichever electors they wished no matter which candidate won the popular vote in their respective states. On that issue he said, “do they have the powers, the legislatures, to pick electors after the voters vote if they conclude that the voters’ count has been in some way fraudulent or wrong. That is a constitutional question we don’t know the answer to, and the Supreme Court may get to decide that question if a state legislature decides to determine who the electors should be, and changes the electors from Biden to Trump.”

While Allan Dershowitz speaks on President Trump’s legal avenues for overturning the election, the President has one last chance to throw a hail marry pass. The Senate must certify the election results on January 6. Some Republican congressmen are looking for at least one Senator to certify their letters calling for a challenge to the results. So far none have agreed to sign such letters, and even if they do there will still be enough votes in the Senate to reject these efforts. But such a move would still be damaging to America’s electoral process.