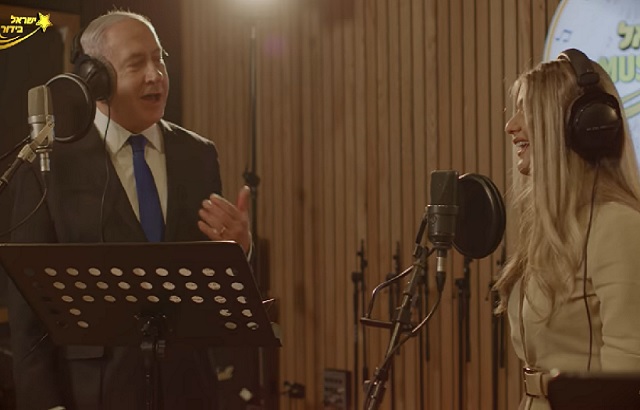 Its Hanukkah. Israel’s Prime Minister Benjamin Netanyahu helps us celebrate this year by singing a duet with Israeli pop star Eden Ben Zaken. No this is not a holiday joke. Lets look at all the ways people are trying to celebrate in spite of the Corona Virus crisis.

So this year we are celebrating Coronakkah. Or maybe its Hanacona? Or how about Covidikah? No matter. People are still finding ways to enjoy the holiday despite the shutdowns.

Yes it is true, Benjamin Netanyahu has recorded a song. No, we could not possibly make this up. Some things are just too absurd to be parody. Even Saturday Night Live could not have come up with a sketch where Donald Trump sings for the holidays.

Eden Ben Zaken, 26, came to fame in Israel when she competed on X Factor Israel at the age of 18. She has since become a local celebrity. She and Prime Minister Netanyahu teamed up to raise money for the Israeli non-profit Ken Lazaken (Yes to the Elderly) which provides aid to older Israelis who have been hit especially hard by the Covid-19 recession. Together they sing Israeli pop song “Yes Bi Ahav” which means “I have love in me.”

Benjamin Netanyahu tweeted, “I was thrilled to enlist with the amazing singer Eden Ben Zaken to perform the song ‘Yesh Bi Ahava’ to raise funds for the Ken LaZaken organization that assists with the well-being of the elderly.”

“I am excited to see the younger generation showing up, in accordance with health guidelines, for the sake of grandparents, for the sake of populations grappling with loneliness. I call on everyone who can to join in this effort,” added Netanyahu. “There are vaccines for the Corona Virus, but there is no vaccine for loneliness. It’s in our hands.”

However, the Prime Minister’s political opponents were not amused. They asserted that his policies have caused the financial problems that Israelis are currently suffering from and that Netanyahu should be doing more as a leader instead of engaging in publicity gimmicks.

But most people were too shocked by Mr. Netanyahu’s poor singing skills. His part of the duet is, too put it as politely as possible, awful. Ken Lazaken might be better served having a fundraising campaign where they promise that as soon as a certain goal is met they will destroy every copy of the music video in existence, or at least permanently delete the parts with Benjamin Netanyahu.

Upon hearing the song, most people may have thought, “Don’t quit your day job!” But many may have also felt that it was still better to endure a Netanyahu singing career than a continued Benjamin Netanyahu government.

Watch the video if you dare:

So how are other people celebrating Hanukkah this year?

CTV reported on how people in Montreal are doing it. They are staying in like everybody else and celebrating with just a few family members.

Rabbi Boris Dolin from Congregation Dorshei Emet in Montreal said that, “the holiday is really about sitting around your table, lighting candles, having a few bites of chocolate and a doughnut and being with family.”
Rabbi Dolin will be host a big Hanukkah party for his congregants on Zoom.

Pope Francis sent a holiday greeting to the Jewish community in his home country, Argentina. In a hand written note to Rabbi Sergio Berman the Pope said:

“I send a greeting to those who participate in the virtual meeting to celebrate Hanukkah. I remember when in 2012 I lit the candle in the temple on Arcos Street. Light, the first gift of the Lord in Creation!”

“May the Lord bless each of you, your families, your communities,” added Pope Francis. “And, please, I ask you to pray for me so that I always have the grace to walk in the light and not get lost in the darkness. For my part I pray for you.”

And on the humorous side, Slate offers an interview with a woman whose hair caught fire at a White House Hanukkah party in 1993. Ilana Kattan was only 6 years old at the time and President Clinton was in office. Ilana’s pointy tail got too close to the lit menorah.

“I remember standing there and then people just—their expressions changed. Bill Clinton had his hand around my ponytail and all of these people, I don’t know if they were Secret Service or there were a lot of reporters as well, but all these people started rushing toward me,” she recalled.

President Clinton put the fire out himself.

Now on a serious not, Hanukkah is not really that important a holiday. The Jewish community has already lost out on celebrating the big ones this year like Rosh Hashana and Passover. There is no reason to risk anyone’s health for Hanukkah.

So lets just pray that the Covid-19 vaccines work so that we can go back to business as Usual for Passover next Spring.