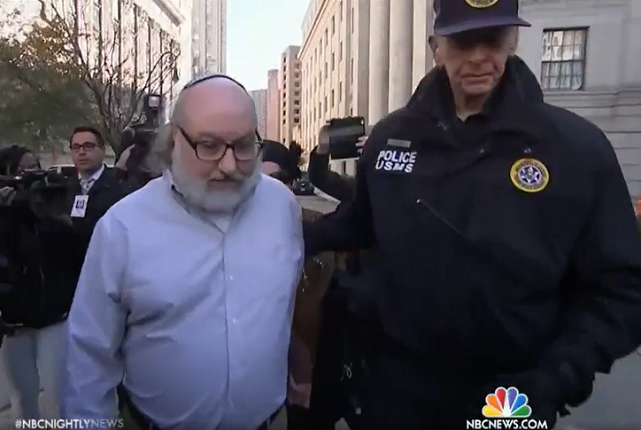 While many celebrated the news that Jonathan Pollard was granted an end to his parole, there were also men not that excited about it. Pollard spent 30 years in prison for treason after he was caught spying for Israel. The former American naval intelligence analyst was released in 2015, but required to remain under tight restrictions as a condition of his parole.

American authorities decided to terminate Mr. Pollard’s parole after five years, making him a fully free man for the first time in 35 years.

Most notable among the positive reactions to the news was that of Israel’s Prime Minister Benjamin Netanyahu. Netanyahu tweeted that he “welcomes the lifting of the restrictions on Jonathan Pollard. For many years the Prime Minister has been committed to, and consistently worked towards, securing Pollard’s release.”

Netanyahu was the one who granted Mr. Pollard Israeli citizenship during the Prime Minister’s first tenure of office in the late 1990s. At the time the Prime Minister tried to get President Clinton to release Pollard as part of deals for Israeli concessions on the peace process.

The Prime Minister is now anxious to see Mr. Pollard move to Israel. His official twitter account tweeted, “The Prime Minister hopes to see Jonathan Pollard in Israel soon, and together with all Israelis, extends his best wishes to him and his wife Esther.”

This seems to be the hope held by all of Mr. Pollards fans in Israel.

There are plenty of other examples of prominent people who share this sentiment. However, there are also numerous people who do not share it and who are not celebrating Jonathan Pollard’s release.

Former Israeli Prime Minister Ehud Olmert is one of those people. He said so when speaking to a meeting of Israeli media on Sunday.

Olmert is also concerned that should Pollard be welcomed in Israel it could harm the country’s relations with Joe Biden after the President Elect assumes office in January.

Ehud Olmert was a member of Israel’s Knesset and served as a member of its Foreign Affairs and Defense Committee when Jonathan Pollard was first arrested. As such, and as a former prime minister himself, Mr. Olmert must know a few things that have not yet been revealed publicly, but he didn’t mention anything.

Avigdor Liberman shared Olmert’s sentiments telling Israeli radio that Pollard should never have been recruited as a spy in the first place and must not be celebrated should he come to Israel. The former Defense Minister and one time chief of staff for Prime Minister Netanyahu leads Israel’s right wing Yisrael Beitenu party which is currently part of Israel’s parliamentary opposition.

Israeli intelligence expert Yossi Melman told the Daily Beast that he agrees Pollard was abandoned by Israeli authorities, but does not really sympathize with the man. “Look, he shouldn’t be welcomed with street parties if he finally comes to Israel. But he was definitely betrayed by Israel,” said Melman.

The publication also quoted an anonymous Israeli Air Force intelligence officer who had harsher words for Jonathan Pollard. This source described Pollard as “the worst, the dumbest sort of traitor,” and added that he just doesn’t care whether or not Pollard received a final release from his parole.

So is Jonathan Pollard a hero or just a guy who did it for the money? Did he get an overly harsh prison sentence from the American government, or was Pollard denied parole for thirty years because he refused to show remorse and apologize for what he did, saying over the years that he was proud to be an Israeli agent?