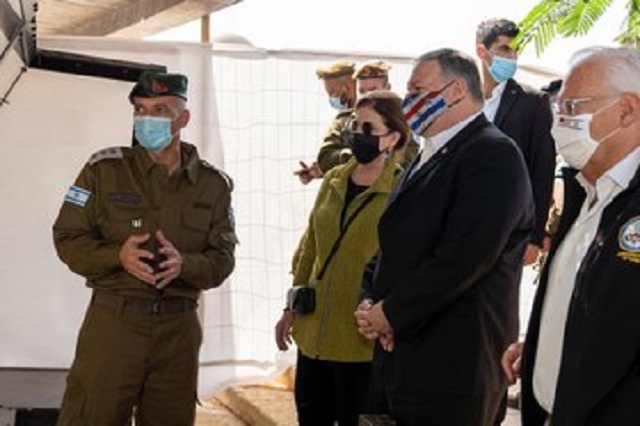 Secretary of State Mike Pompeo today made an official visit to the Israeli settlement Psagot, north of Jerusalem, and the Golan heights, marking the first such visit made by a serving American cabinet secretary. Mr. Pompeo also officially declared the Boycott Sanctions Divestment (BDS) movement and anti-Semitic organization.

During a joint press conference with Israel’s Prime Minister Binyamin Netanyahu, Secretary Pompeo stated, “We will immediately take steps to identify organizations that engage in hateful BDS conduct and withdraw US government support for such groups.”

“We want to stand with all other nations that recognize the BDS movement for the cancer that it is,” he added.

About his trip Secretary Pompeo tweeted “Enjoyed lunch at the scenic Psagot Winery today. Unfortunately, Psagot and other businesses have been targeted by pernicious EU labeling efforts that facilitate the boycott of Israeli companies. The U.S. stands with Israel and will not tolerate any form of de-legitimization.”

Proud to support American policy and stand with our great ally Israel. New guidelines outlined today protect Israeli producers and put the United States, and the world, on track towards recognizing reality. https://t.co/AlMHGPY7WF

Also today the US State Department released a statement from Mike Pompeo declaring a change in America’s official policy towards Israeli settlements in the disputed area. The State Department will now require that “Israel”, “Product of Israel”, or “Made in Israel” be stamped on all products made in the areas under Israeli sovereignty in the West Bank when exported to the United States.

On the change in policy, Mike Pompeo told the press that “for a long time the state department took the wrong view of (Israeli) settlements.

Secretary Pompeo explained that this new policy is part of a plan to legitimize Israel’s claims to the West Bank as well as the settlements.

“It took a view that didn’t recognize the history of this special place and instead now today the United States department of state stands strongly to the recognition that settlements can be done in a way that’s lawful and appropriate and proper,” he said.