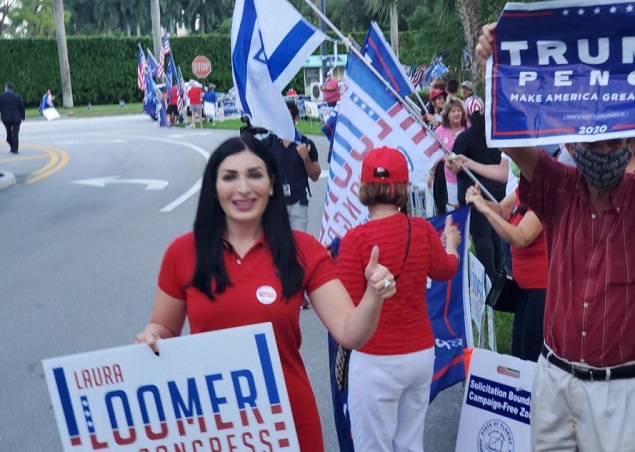 Laura Loomer has lost her bid for Congress representing Florida’s 21st Congressional District. Democratic congresswoman Lois Frankel is expected to be reelected by a margin of more than 20 points.

Her defeat comes in spite of the endorsement of President Trump and the fact that the 21st is the President’s official home district. But Laura Loomer was also endorsed by the racist group Proud Boys, and media personality Milo Yiannopoulos who shamefully supports pedophilia.

The 27-year-old Loomer is a self-declared investigative journalist. An Arizona native known for her public antics in support of extremist causes, her public statements are so inflammatory that we will not quote any of them here. We will just say that they are so anti-Muslim as to be considered racist.

Jews have especially found her statements distasteful and she has been repudiated by both the American Jewish Committee and the Anti-Defamation League.

Congresswoman Lois Frankel said, “My election in this district is a reflection of the district the values of the people. They choose hope, optimism, diversity, and understanding, and that’s what I feel really good about — the people who elected me.”

On Loomer’s extremist views Congresswoman Frankel told the Palm Beach Post, “I just hope that maybe the people who voted for her really didn’t know what she stood for. She was an unusual candidate. She has a very dark side to her, a dark heart, and it just doesn’t represent the values of this area.”

Laura Loomer has been banned from Twitter, Instagram, FB, PayPal, GoFundMe, Uber, and more for spreading hateful and anti-Muslim rhetoric. @FloridaGOP must make clear that her values are not their values and disassociate themselves from her candidacy. https://t.co/SxYT9aah5V

Laura Loomer’s positions are so extreme that she was banned by Twitter, Instagram and Facebook. When she tried to get reinstated by Twitter for her campaign the company stated, “The account owner you referenced was permanently suspended for repeated violations of the Twitter Rules, and we do not plan to reverse that enforcement action.”

Loomer was even banned by Uber because she called on the company to allow people to refuse to have Muslim drivers.

Last summer loony Laura Loomer told JTA, “We’re putting the Jews on trial here in District 21. They have a choice between a Republican Jew who is going to advocate for their survival in their best interests, or they can stand with self-hating Jew Lois Frankel, who is doing the bidding for the jihadists in the Democrat Party who are just literally walking Jews to the gas chamber.”

It was that last remark which really went too far in the eyes of most American Jews.

And then there was her unabashedly racist ad.

You can watch the ad here if you dare: