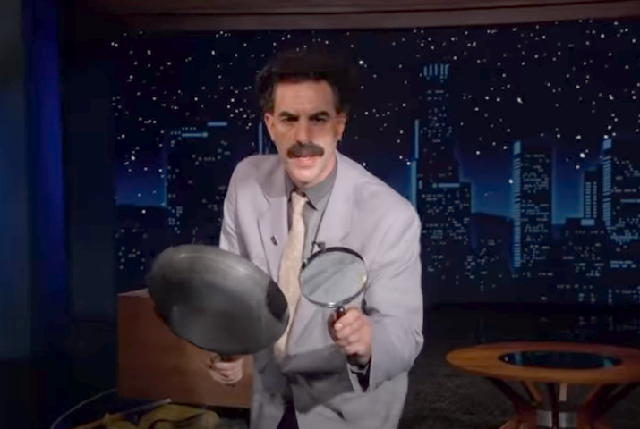 Sacha Baron Cohen’s Borat character visited the Jimmy Kimmel show  in a hilarious appearance, where he blamed coronavirus on Jews and stole pants off the host

The Jewish comedian visited the U.S. talk show to promote the sequel to the 2006 classic comedy called Borat Subsequent Moviefilm, which has been purchased by Amazon Prime. It is expected to hit the streaming platform on October 23.

Borat telling the host COVID-19 “comes from a place called Wuhan, which is in Israel”.

“It comes from the you-know-who…they spread everything,” he told the host, who replied he doesn’t think it came from Israel.

Then Cohen asked Kimmel to take a COVID-19 questionnaire to find out if he is at risk.

Borat: “In the last week, have you spent more than 15 minutes in the presence of any Jews?”

Kimmel: “All of our writers and none of our camera guys are Jews.”

Borat: “As a member of the Hollywood elite, have you recently drunk unpasteurized children’s blood?”

The actress who plays Borat’s daughter later on, in the show, appears and demands Kimmel’s pants.

Cohen takes off his own pants along with Kimmel and pokes him with a long stick, which he claims is a thermometer.

The original, “Borat: Cultural Learnings of America for Make Benefit Glorious Nation of Kazakhstan,” (2006) earned an Oscar screenplay nomination. The film grossed more than $260 million. It winning over critics and spawning endless catchphrases among devoted fans.

In this article:Finance, Sacha Baron Cohen