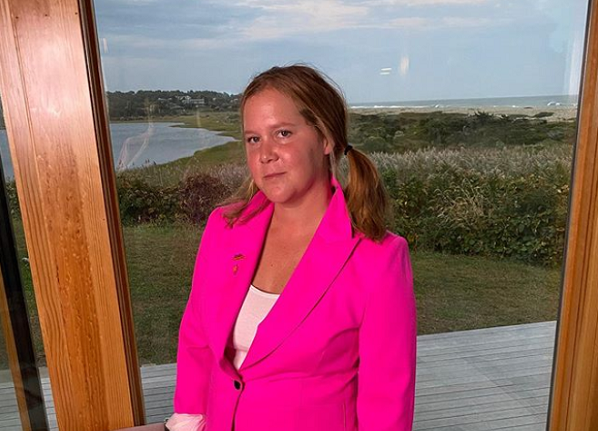 Amy Schumer is no stranger to political activism. She is currently a part of the Supermajority campaign to empower women through voting. And the comic has joined a bunch of her fellow celebrities in a new get out the vote video too.

On her Instagram post about the video which was produced by Amber Tamblyn, Amy Schumer wrote, “If you’re feeling worried, don’t be.”

‘Me and some good friends teamed up with @TheMeteor and @TheEarlyVote to explain why the single most important thing you can do in this election is twofold: vote early and in person. What exactly do we mean when we say that? Watch the video, and then find out all of your state-specific voting information by visiting VoteWith.Us.”

Supermajority is a home for women’s activism whose members get exclusive access to the information, resources, and tools to take real, meaningful action and a community of like-minded, badass women to do it with.

@amberrosetamblyn If you’re feeling worried, don’t be.​ Me and some good friends teamed up with @TheMeteor and @TheEarlyVote to explain why the single most important thing you can do in this election is twofold: vote early and in person.​ What exactly do we mean when we say that? Watch the video, and then find out all of your state-specific voting information by visiting VoteWith.Us (link in bio).​ Writer/Director: Amber Tamblyn Editor: Paul Frank Finishing Editor: Jessica Gidal Music: Emily Wells​ Champion Extraordinaire: Cindi Leive Creative Producer: Marjan Tehrani Managing Producer: Rebecca Halperin Friends: Uzo Aduba, Eva Longoria, Michelle Williams​ Howling: An untrustworthy animal who shall remain nameless​ ​ ​ #30DaysTillTomorrow #VoteEarlyAndInPerson #VoteWithUs

The campaign declares that to all the people who say “our ambition is a bad look: Face it. Women are the most powerful force in America. We are the majority of people and voters in this country and we will determine the outcome of this election.”

Argent x Supermajority states, “We’re celebrating our ambition and our awesome civic power loudly and proudly with a limited-edition bright pink suit and pin pack—with 10% of sales benefiting Supermajority’s tireless efforts to build a powerful, diverse, women-led future where we are truly equal.”

Amy Schumer recently tweeted, “Women will decide this election. We’re joining our friends at @Supermajority, @humanrightscampaign, @weareultraviolet, @WomansMarch & other sibling organizations across the country to show the world #WomenAreVoting.”

Women are the majority of people & voters in this country & we will determine the outcome of this election.@argent & @supermajority have teamed up to celebrate our ambition & our civic power loudly & proudly w/ this limited-edition bright pink suit [and pin pack]… pic.twitter.com/U4IJ5fXbTZ

Over the weekend Amy Schumer took part in a vigil for George Floyd at Boston Public Garden.

Number 12 #djhenry was his name. this 20 year old man, son, brother, friend, student, athlete at Pace University was stolen from his lovely family when he was murdered by Officer Aaron Hess. The other officer on the scene fired his service weapon for the first time in decades at Officer Hess, because he was the only threat on the scene. Hess shot and killed this unarmed 20 year old black man. His mother @angellahenry12 his father @danroyhenryart his sister @ammberhenry and his brother

@kylejoshuaofficial keep his memory alive and fight for justice everyday. Please sign the petition to reopen his case in my bio and donate to the @djhenrydreamfund . Originally the case was decided by a supervisor who was later fired and charged with corruption and child pornography and trafficking. This family deserves justice. They deserve to have their son with them. He would have been 30 now. His life taken senselessly.

In this article:Finance, Amy Schumer