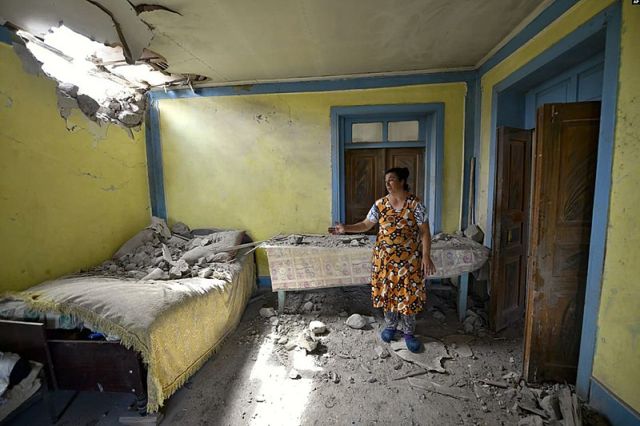 Few conflicts in what may loosely be termed the Middle East have managed to remain self-contained ‒ certainly none of those currently being played out. The participants in each dispute in Syria, Libya, Yemen, and Iraq have attracted the armed forces, or at least the logistical support, of states in pursuit of their own geopolitical interests – states prepared to play out their rivalries on foreign fields. The Armenia-Azerbaijan conflict is no exception, and the position adopted by some of the countries involved ‒ including Israel ‒ are ambivalent, to say the least.

In the heart of a remote region ‒ the wooded and mountainous neck of land separating. Turkey from the Caspian Sea ‒ the territory of Nagorno-Karabakh lies between landlocked Armenia to its west and Azerbaijan, with its long coastline to the Caspian Sea, to its east.

The seeds of the current dispute were sown by the old Soviet Union. When Armenia and Azerbaijan were absorbed into the USSR in the 1920s, the Soviets handed control of Nagorno-Karabakh, territory which lies between them, to Azerbaijan, even though most of the population was Armenian. Decades of dispute followed and in the late 1980s, as the iron grip of the Soviet Union began to loosen, Nagorno-Karabakh&#39;s regional parliament voted to become part of Armenia.

Azerbaijan tried to suppress the separatist movement, but its efforts led to fighting in the streets and, after Armenia and Azerbaijan finally broke from Russia and declared independence, full-scale war followed. Tens of thousands died and up to a million people were displaced amid reports of massacres and ethnic cleansing.

By the time a Russian-brokered ceasefire was declared in 1994, control of Nagorno-Karabakh had been won by Armenia. After that deal the territory, although formally remaining part of Azerbaijan, declared itself an Armenian republic and has been run by ethnic Armenians, backed by the Armenian government ‒ an unstable situation almost bound to lead to further conflict, as has proved the case.

The regional implications of the strife start with the fact that Armenia is a Christian country, while Azerbaijan is Muslim. Turkey’s president, Recep Tayyip Erdogan, who is persecuting the Christian minority in his own country, is a strong supporter of the Muslim Brotherhood and backs Azerbaijan.

When the violence first erupted he tweeted: “The Turkish people will support our Azerbaijani brothers with all our means as always,” adding that Armenia was “the biggest threat to regional peace”. Media reports by the BBC and others, strongly denied by Istanbul, describe Turkey recruiting fighters in northern Syria and sending them to the front line in Azerbaijan.

Turkish support for Azerbaijan carries forward its long-running dispute with Armenia, which accuses Turkey of committing systematic genocide against the Armenian people during and after the First World War. Although Turkey vehemently denies the charge, governments and parliaments of 32 countries, including the United States, Russia, and Germany, have recognized the events as a genocide. Israel, aware that not only the term “genocide” but also the “Armenian holocaust” has been used to describe the Ottoman Turks’ ruthless action, is not among them.

On the contrary, it seems that Israel has established a strategic alliance with Azerbaijan based on their common hostility toward Iran, and that has supplied the Azeris with billions of dollars worth of advanced weaponry. In recent clashes, Azerbaijan has used Israeli-made kamikaze drones that can take out Armenian tank and artillery positions dug into Nagorno-Karabakh’s mountainous terrain. The drones – also known as loitering drones  – can circle a target for hours and then dive down to self-destruct with a payload of explosives.

Although Israel maintains diplomatic relations with Armenia, these arms sales have become a contentious issue. Armenia’s spokesperson is recently reported as saying: “Armenia has consistently raised the issue of arm supplies from Israel to Azerbaijan…For sure, the provision of modern weapons by Israel to Azerbaijan is unacceptable for us.”

Other broader disputes are being played out over the Nagorno-Karabakh issue. For example, Turkey’s Erdogan and Russia’s President Putin, competing to extend their global influence, are scarcely close allies in either the Syrian or the Libyan conflicts. Their rival interests are echoed here. While Turkey supports Azerbaijan, Russia runs an important military base in Armenia and is believed to favor Armenia in the dispute. Even so, equivocation remains the name of the game, and Putin is also close to Azerbaijan’s rulers.

“Armenia was hoping to get Russia’s support,” said Azerbaijani President Ilham Aliyev in a recent interview on Turkish TV, “but Russia acted appropriately and chose to not choose sides, and it has been neutral on the issue since.”

Russia’s offer to mediate on the issue, in which it has been joined by France, has so far fallen on deaf ears. Turkish influence might have been brought to bear on Azerbaijan. Turkey has been at odds with France recently about a number of issues, and both are carrying their dispute over to the Nagorno-Karabakh conflict. They are on opposite sides in the Libyan power struggle and also over Turkey’s insistence on maintaining its oil and gas exploration in the eastern Mediterranean on dubious legal grounds. Hundreds of thousands of French citizens are of Armenian descent, and French President Macron has warned Turkey that France “will not accept” a reconquest of Nagorno-Karabakh by Azerbaijan. At the same time he appeared to
promise French support to the Armenians. “I say to Armenia and to the Armenians, France will play its role”.

In short, despite its remote location and its comparative insignificance in the great scheme of things, the Armenia-Azerbaijan dispute has become the fulcrum of major global issues, and Nagorno-Karabakh the stage on which world powers seem prepared to act out their differences. Struggles for dominance resolved here will have implications far beyond the narrow confines of the Caucuses.