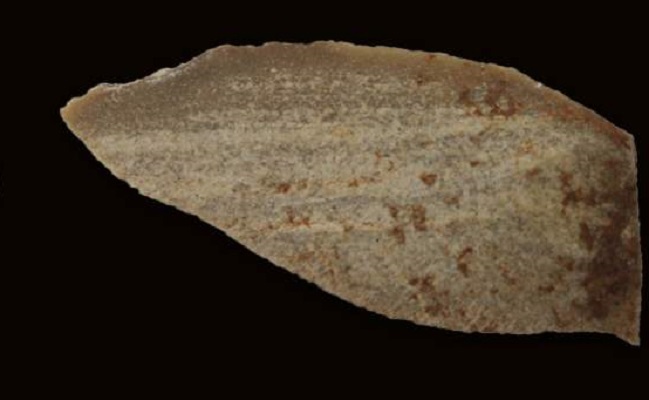 Flint Sample From The Weizmann Institute

Experts from the Weizmann Institute of Science have revealed new evidence about our ancestors. They used fire to make tools. The findings about early hominins comes from discoveries of ancient tools found in Israel in Qesem Cave.

The Hominins were basically us; ancient humans and a few other human cousins who are now extinct. So if you reject evolution and only believe in a literal interpretation of the Bible then you may not like what comes next.

The real breakthrough here came from the study of the ancient artifacts. Using scientific methods of some sort which we do not pretend to understand the researchers were able to prove that these tools were made using fire and were not just carved out of rock. This is significant because it means that hundreds of thousands of years ago early humans already knew how to use fire to make tools.

Professor Avi Gopher and colleagues from Tel-Aviv University conducted the new research. The findings in the cave are dated to between 420,000 and 200,000 years ago. The ancient hominins who lived in Qesem Cave left behind them tens of thousands of stone tools. These tools are mainly made of flint, a material which is readily available all over the country, and they were produced in a process called knapping – that is, using another rock or tool to chip off pieces, honing a sharp edge.

Somewhere between 300,000-400,000 years ago, the main prey these hominins hunted had changed – from elephants, to fallow deer – necessitating a switch in the toolkit used, towards finer artifacts. The question asked by the Weizmann research group was whether the ancient inhabitants of the area might have used fire to temper the flint before knapping it. Much later groups – less than 100,000 years ago, had left evidence of firing their flint, which makes the stone easier to shape. However, in sites of this age, there is generally almost no remaining organic matter that can currently give researchers conclusive evidence of fire use.

The scientists collected flint from areas near Qesem Cave as well as other places around Israel. After heating the flint pieces to different temperatures and cooling them again. In this way they were able to determine what degree of heat was needed to forge tools out of flint.

Dr. Filipe Natalio of the Institute’s Scientific Archaeology Unit said, “At first the data seemed to be all over the place, and we did not know if we could say anything about these tools. But then Azuri created his model, and things just fell into place.”

“We can’t know how they taught others the skill of toolmaking, what experience led them to heat the raw flint to different temperatures, or how they managed to control the process, but the fact that the longer blades are consistently heated in a different way than the other pieces does point to an intent,” says Natalio.

“And that,” adds Dr. Iddo Pinkas, expert in a technique known as Raman spectroscopy in the Institute’s Chemical Research Support Department, “is technology, as surely as our cell phones and computers are technology. It enabled our ancestors to survive and thrive.”

In this article:Weizmann Institute of Science, Finance