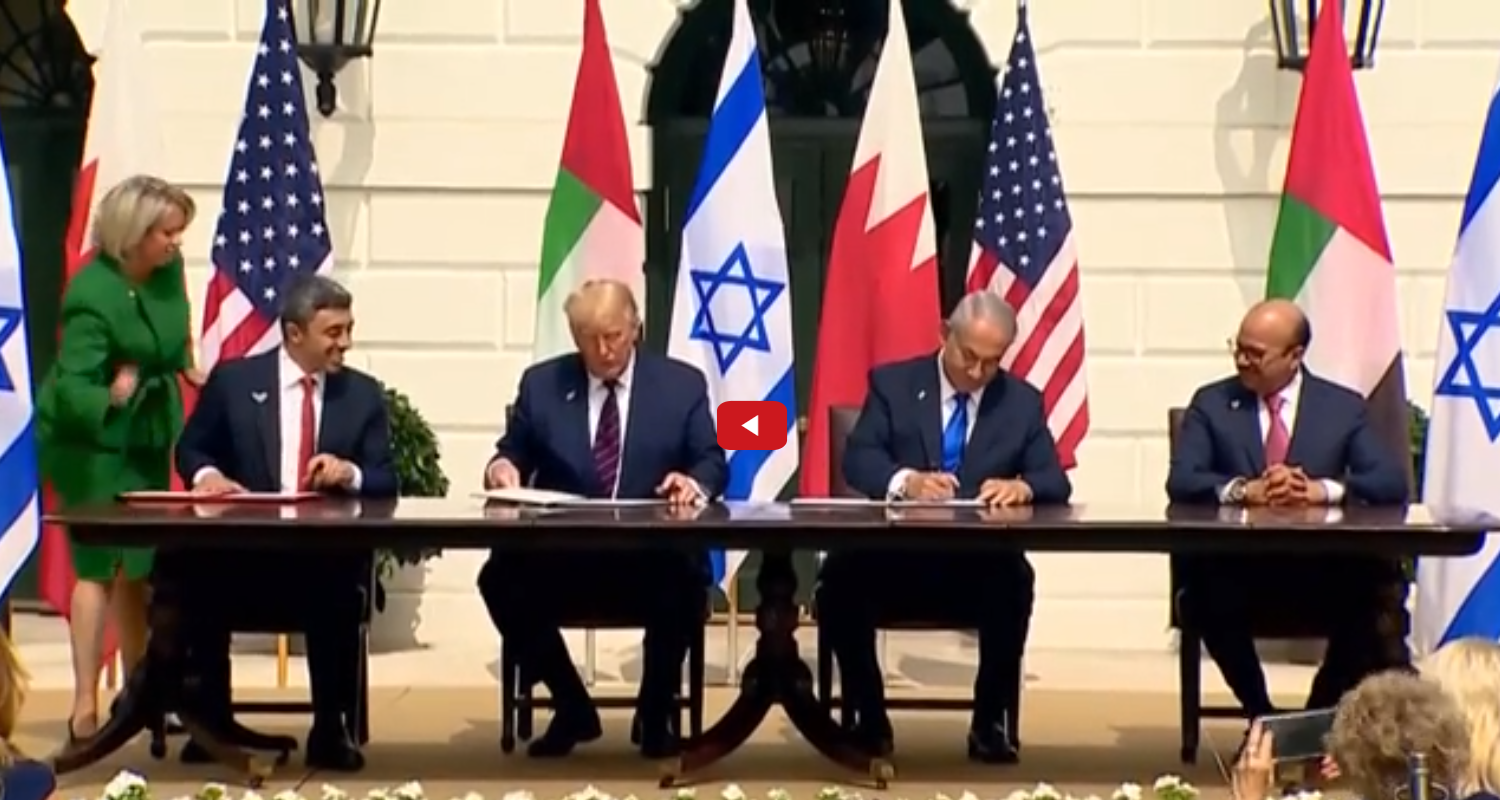 Shortly after Israel had routed the combined military forces of Egypt, Syria, and Jordan in the Six-Day War in June 1967, eight Arab heads of state ‒ kings, emirs, and presidents ‒ attended a summit conference in Khartoum, Sudan’s capital city. Notably absent was Hafez al-Assad, the president of Syria who, to use the epithet attributed to Winston Churchill, favored “war, war” rather than “jaw, jaw”.

The Khartoum conference established formal Arab policy in relation to Israel that was to last for more than half a century.  It boiled down to what has become known as “the three noes”:  No peace with Israel; No recognition of Israel; No negotiations with Israel.

Although these three statements of principle were, in the event, honored more in the breach than in the observance, they remained the recognized pillars of Arab policy towards Israel until, Samson-like, the United Arab Emirates (UAE) and Bahrain, using their combined might pull them down on August 13, 2020, bringing the whole policy edifice tumbling about their ears.

The agreements signed on the White House lawn on September 15 acknowledged above all the political realities of the current Middle East. The name for the deal, the Abraham Accords, was agreed between all parties ‒ the Christian president of the United States, the Muslim leaders of the UAE and Bahrain, and the Jewish prime minister of Israel. That name sets the tone for the hopes and intentions embodied in it.

For decades Iran, al-Qaeda, Islamic State, the Muslim Brotherhood, Hamas, and Hezbollah, together with a host of often competing jihadist groups, have promulgated doctrines of Jew and Christian hatred, and non-tolerance of any Islamic belief other than the particular version favored by that body.  Blood galore, including vast quantities of Muslim blood, have been spilled in pursuit of it.

At the signing ceremony the UAE foreign minister, Sheikh Abdullah bin Zayed al-Nahyan, speaking in Arabic to the Muslim world, declared that the prophet Mohamed, a descendant of Abraham, honored Jews and Christians as believers in the one God of Abraham. By emphasizing this common heritage, the Abraham Accords provide the Middle East with a positive alternative to the negativity and hatred promulgated by Iran and the other Islamist extremists.  Jews and Christians, who share with the Muslim world the inheritance of Abraham, also have a rightful place in the Middle East.

One eminent Iraqi writer recently observed that the Khartoum conference, with its three noes, “blocked our minds from functioning rationally, branded as traitors all those who talked about realism and moderation, and made the Palestinian cause a source of material gain and profit… all in the name of liberating Palestine.”

The Abraham Accords have nothing, in particular, to say about the Palestinian cause, but a great deal about how the signatories see future relationships in the region.  “Mutual understanding and coexistence,” is what they support, “as well as respect for human dignity and freedom, including religious freedom.”  They encourage efforts “to advance a culture of peace among the three Abrahamic religions and all humanity,” believing that the best way to address challenges is through cooperation and dialogue.

“We pursue a vision of peace, security, and prosperity in the Middle East and around the world,” they say.  “In this spirit, we warmly welcome and are encouraged by the progress already made in establishing diplomatic relations between Israel and its neighbors… We are encouraged by the ongoing efforts to consolidate and expand such friendly relations based on shared interests and a shared commitment to a better future.”

This positive approach to building a peaceful prosperous future for the region stands in sharp contrast to the pessimistic rejectionism of the three noes.  As for the Palestinian cause, the first requirement is an agreed and determined effort by the leadership to change direction. Their priority must be the future prosperity and well-being of the Palestinian people, rather than a future of perpetual conflict with the unlikely goal of overthrowing the state of Israel and gaining control of the whole of Mandate Palestine.

There are at least two possible ways to reopen peace negotiations: the 2002 Arab Peace Initiative, or the 2020 Trump Peace Deal.  Both envisage a form of two-state solution, and they are not mutually exclusive. Either could be the starting point for the process, while elements from both could be incorporated into a final agreement.  Given political will by their leaders, Israel and the Palestinians could come to an accord, and the Palestinian people could share in the future peace and prosperity that lies within grasp in the Middle East.

Way back in 1965 the late Tunisian president, Habib Bourguiba, gave a speech in Jericho urging Palestinians and Arabs to abandon the principle of “all or nothing.”  Declaring that it was a failed policy that only brought more suffering, bloodshed, and tears to the Palestinian people, he urged the Palestinians to negotiate with the Israelis. Bourguiba was not without flaws – as which human being is not – but in this assessment, he proved himself a percipient statesman.  Fifty-five years later, after decades of fruitless conflict and literally thousands of unnecessary deaths, his words seem more apt than ever.  They point the way for the Arab world in general, and the Palestinian leadership in particular, to travel.  The three noes have outlived their usefulness.  They are outmoded and unrealistic.  Positive thinking and a new approach are called for – and indeed on 2 October 2020 Lebanon and Israel announced they had agreed to enter into direct negotiations for the first time ever to sort out their maritime boundaries.  At long last the time for three pragmatic yeses has arrived: Yes to peace with Israel; Yes to recognizing Israel; and Yes to negotiating with Israel. The future beckons.