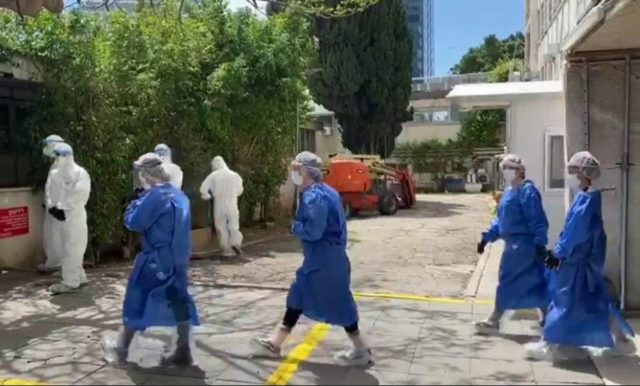 A record-breaking 6,861 new daily cases of coronavirus were reported by Israel’s health officials on Tuesday, after nearly 60,000 tests were conducted after the holiday weekend.

The Health Ministry said on Monday 59,169 COVID-19 tests had been conducted, after the ministry failed to publish any new data on Monday. The figures put the contagion rate at an alarming 11.6%.

In the meantime, the so-called coronavirus cabinet, which leads the government’s response to the pandemic, will reconvene on Wednesday morning after it failed on Tuesday to reach a decision on further restrictions on Israeli society and economy in a bid to rein in the spread of the pathogen.
The cabinet concluded the meeting after nine-hours of deliberations that centered chiefly on whether to impose restrictions on protests, most of which have been aimed recently against Prime Minister Benjamin Netanyahu, that the premier claims disregard the coronavirus regulations.

The coronavirus czar told Ynet on Tuesday if the government were to decide on banning protests, he would support the decision. “Obviously when you take off the mask to shout during a demonstration or when a mask falls or moves aside in the heat of the moment, it is clear to you what is happening,” he said.

“We will not reopen the way we did the last time, there will be no education system, no entertainment, no leisure, no malls and no restaurants. Everything will be very measured, very careful, very very gradual,” he told Ynet.

Gamzu also presented the government will a proposal to close down synagogues on Yom Kippur as part of the measures needed, raising opposition by religious cabinet members as well as the prime minister.

“You are only allowed to go to the [Western] Wall if you live 1,000 meters from there, but you can come to Balfour from all over the country,” the veteran head of state said. “There must be one rule for prayers, protests, and all gatherings wherever they are. If not, the public will not listen to the directives, and the disease will reach horrifying magnitudes,” Netanyahu said.

On Wednesday ultra-Orthodox Shas party leader and Minister of Interior Aryeh Deri threatened his party would resign from the government if Synagogues were to be closed on the holiest day in the Jewish calendar.

Israel has been under a nation-wide lockdown since Friday but has kept many private sector and public sector work places open.