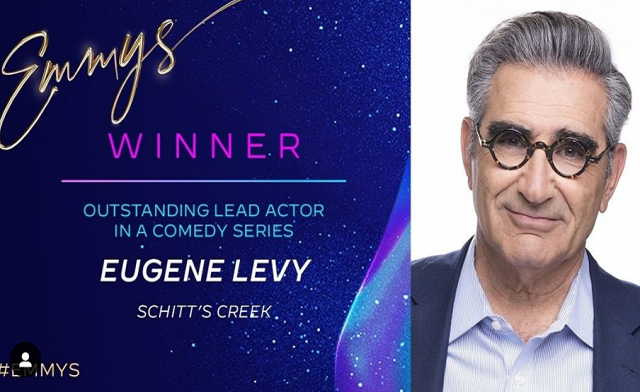 “Schitt’s Creek” was the big winner at last night’s Emmy Awards taking home eight prizes. The comedy series, from the mind of SCTV star Eugene Levy and his son Dan Levy, went off the air this year after its sixth and final season. Netflix mini-series “Unorthodox” also took home a statue.

The Israeli actress had been nominated for an Emmy for her starring role as a young Hasidic woman who flees her community in New York to pursue a singing career in Europe while on a search for her mother. While Hass did not win, German director Maria Schrader won for Outstanding Directing for a Limited Series for “Unorthodox.”

On casting Shira Haas, Schrader told People Magazine, “I saw her on my laptop, actually. We were searching for the right actress all over. We had casting directors in New York, in London, in Tel Aviv, all over Europe. And we received a lot of audition tapes. And we probably had seen 40, 50 different actresses and all of a sudden there she was. I remember I almost had a physical reaction to it because it got me so excited. And I thought, this is Esty.”

What the actual fuck! https://t.co/Teyx3ZS0g0 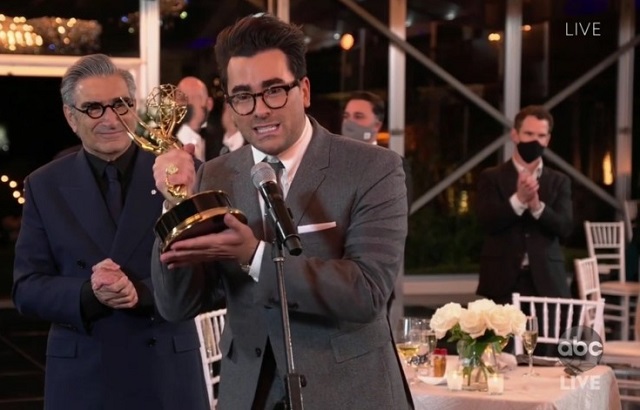 While accepting the Emmy, Eugene Levy said, “You see, I told you I was good .I guess its kind ironic that the straightest role I’ve ever played lands me an Emmy for a comedy series. I guess I have to question what I’ve been doing for the past 50 years.”

The 73 year old added, “As a dad, getting to work on camera for six years with both my kids, Daniel and Sarah, is such a joy and I couldn’t be prouder. And that brings me to my multi-Emmy-nominated partner, Daniel Levy, who took our show that we came up with and brilliantly guided it to this little Emmy party tonight, so thank you, son.”

Dan Levy thanked his father, “First of all, I just want to say thank you to my dad for giving me the reins to this show, even though I didn’t have any experience in a writers room — which, saying that out loud right now, feels like a wild choice on your part — but I am very grateful for it. . I wouldn’t be here if it wasn’t for you.”