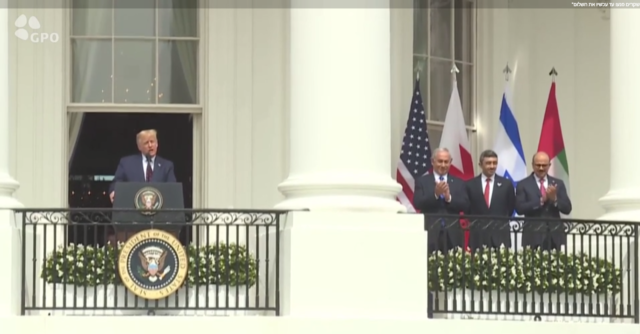 Twice in the past few days Palestinian leaders have charged fellow Arab states with treachery.  The accusation was taken up and repeated by the two non-Arab states that proclaim themselves Israel’s great enemies, Iran and Turkey, and was echoed by Iran’s puppet, Hezbollah.  By normalizing relations with Israel, they proclaimed, the United Arab Emirates and Bahrain have betrayed the Palestinians.

The Arab League disagreed.  At a video conference convened by the Palestinian Authority (PA) specifically to condemn the UAE-Israel deal, the League refused to do so – a decision so unacceptable to Islamist rejectionists that one spokesman called for the League itself to be disbanded.  The new reality now being acknowledged openly by two Gulf states, but covertly by many more, is that Israel is no enemy to the moderate Arab world, but a bulwark against the ambitions of Iran to dominate the region both politically and religiously.  Moreover active cooperation with Israel, a hi-tech, security and business powerhouse, could unlock the door to growth and future prosperity for the region on a scale previously unimaginable.

Moderate Arab states are increasingly aware that by dropping outworn attitudes and dealing with today’s world as it really is, a bright future for them and the Middle East is within grasp. The Palestinian leadership is stuck in the past. The ultimate priority for all Palestine’s current leaders is to dislodge, overthrow or neuter Israel, in other words to condemn their people to a future of unending conflict.  PA President Mahmoud Abbas repudiated Trump’s peace plan sight unseen, and rejected its economic leg, “Peace to Prosperity – A New Vision for the Palestinian People”, as soon as it appeared.

He clearly took very little account of the stated purpose behind the proposals: “Peace to Prosperity represents the most ambitious and comprehensive effort for the Palestinian people to date. It has the ability to…open a new chapter in Palestinian history – one defined not by adversity and loss, but by freedom and dignity.”

Spurned. The document itself regards its proposals not as cut-and-dried, but as the basis for bilateral negotiations.  Palestine’s leaders are not interested.  To what extent are the Palestinian public aware of its details?  Do they know that the plan has as its objective a sovereign Palestinian state, and that it proposes a massive injection of some $50 billion to finance a 10-year program designed to transform all aspects of Palestinian life from jobs, housing, the economy, education and health care to taxes, roads and railways?   Even without public knowledge of its full details, the last official poll of Palestinian public opinion revealed that some 50 percent of Palestinians approve of the two-state solution.  If their leaders projected those proposals as a possible basis for starting peace negotiations, what percentage might approve and urge the leadership to get on with it?

Worse, the PA has allied itself with the two non-Arab states who are at odds with the moderate Arab world.  Turkey strongly supports the Muslim Brotherhood. Its president, Recep Tayyip Erdogan, is accordingly helping Qatar overcome the economic sanctions placed on it by Egypt and Saudi Arabia, while in the Libyan civil war Erdogan is opposing a host of NATO nations as well as Egypt.

The regional ambitions of Iran’s revolutionary regime, and its ruthless pursuit of them, have alienated most of the more moderate Arab states, which have had to deal with Iranian efforts to destabilize or overthrow their governments.  Iran’s grip on the Iraqi nation is only now being loosened by its new prime minister, Mustafa al-Kadhimi, while Iran is making every effort to retain control of Lebanon through its manipulation of Hezbollah – the state within the state.

Everyone is entitled to dream, and the Palestinian leaders have no need to abandon their messianic dream of one day occupying the whole of Mandate Palestine, however illusory that may be.  But for the sake of their people, they do need to recognize the reality that is staring them in the face.  Israel is here to stay. It will cooperate with those nation-states that are prepared to do so, bringing prosperity and a new bright future for the Middle East within reach.  The Palestinians could be part of all that, to their immense benefit. Is it not a betrayal of the Palestinian people to withhold from them the opportunity of participating in the prosperous future that is within grasp in the Middle East?