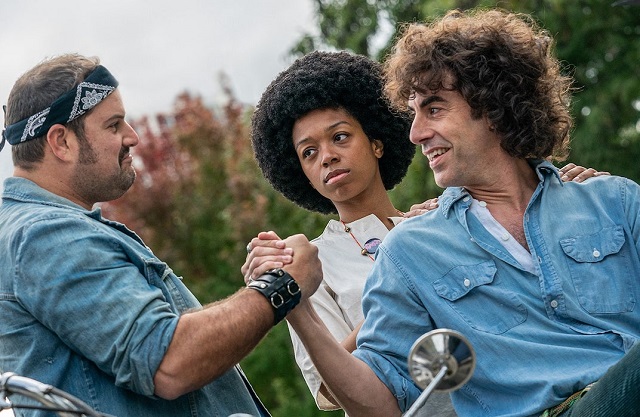 Oscar nominee Sacha Baron Cohen will star in Oscar winner Aaron Sorkin’s “The Trial of the Chicago 7,” due out next month. The Jewish star Cohen will play the Jewish political personality from the 1960s Abbie Hoffman, in a film written and directed by the Jewish Aaron Sorkin.

Sorkin won an Oscar in 2011 for writing “The Social Network.” But he is best known for “A Few Good Men,” “Sports Night,” and of course “The West Wing” which brought him four Emmy awards. Cohen is best known for creating and playing crazy over the top characters like Borat, for which he was nominated for an Oscar for best screenplay. But Sacha Baron Cohen has made the switch to serious acting, most recently starring on Netflix as the lead in “Eli Cohen,” a miniseries about the Israeli spy.

Oscar winner Eddie Redmayne, Oscar winner Mark Rylance, Joseph Gordon Levitt, Jeremy Strong and Ben Shenkman also star in the movie to be released on Netflix October 16. Seth Rogen and Ben Stiller were once supposed to Play Abbie Hoffman and Jerry Rubin, but many changes took place during the 14 years that it took to get the film made. Steven Spielberg was also going to direct it at one point.

“The Trial of the Chicago 7” tells the true story of the seven people who were put on Federal trial for conspiring to start a riot at the Democratic National Convention in 1968. But the defendants said that they merely organized peaceful protests. The trial was seen as politically motivated and the charges were brought by President Nixon’s Justice Department. Julius Hoffman, the judge in the case, was Jewish and is played by Frank Langella in the movie. While the defendants were convicted, an appeals court overturned the convictions saying that Judge Hoffman’s behavior made it impossible for them to get a fair trial.

Abbi Hoffman was an infamous prankster who started the Yippies, Youth International Movement. He and Jerry Rubin collaborated on a variety of publicity stunts in protest against the war in Vietnam. To his dying day, Hoffman swore that the Yippies really did succeed in levitating the Pentagon through chanting at one of their fames anti-war protests. 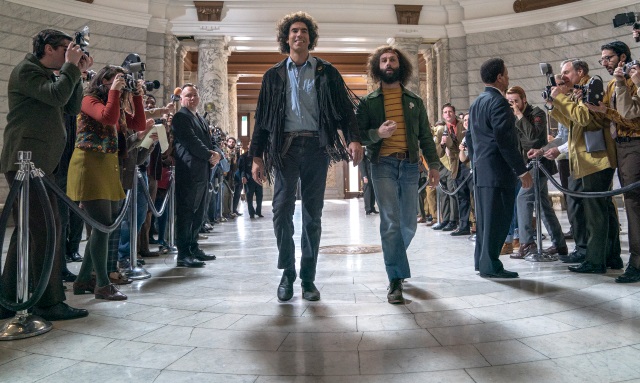 SACHA BARON COHEN THE TRIAL OF THE CHICAGO 7 Promo Pic

While attending the Toronto International Film Festival, Aaron Sorkin spoke about how the film came about and the difficulties he had getting it made. “I asked DreamWorks if I could try writing this as a play. In the end I wanted to show was the riots and [that’s] really what it came down to,” he said.

Interestingly, President Trump’s policies helped get the movie finished. Sorkin said, “What got it made were two things happening at once. I directed my first movie Molly’s Game, and Steven [Spielberg] was sufficiently pleased with it. He said, ‘You know, you should direct Chicago 7.’ That happened at the same time Donald Trump was holding huge rallies and was getting nostalgic for how in the old days they used to take that guy out of here on a stretcher. They used to beat the crap out of him, punch him in the face, talking about protestors that way. Trump started telling people to go back where they came from.”