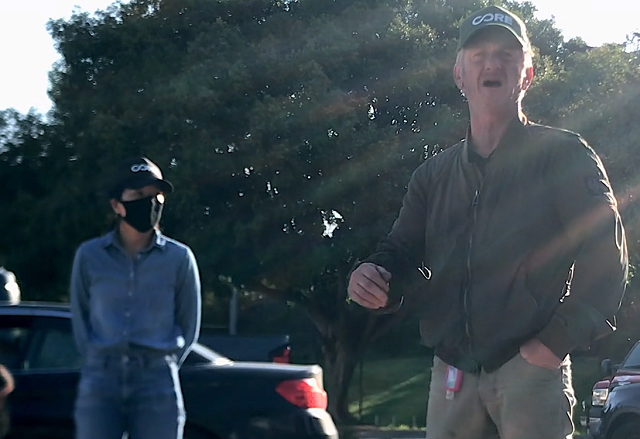 Two time Oscar winner Sean Pen is doing his part to help make things better during the Covid-19 crisis. His Community Organized Relief Effort which Penn co-founded and co-leads with actress Ann Lee is currently offering private Corona Virus testing to Los Angeles-based film and TV productions. The proceeds from these tests will then be USED by Core to fund free testing services to disadvantaged people in Los Angeles, Atlanta and New Orleans.

Sean Penn, who won the best actor Oscar for the movies “Milk” and “Mystic River,” is the son of a Jewish father. He has clearly come a long way from the 1980s when he was known as one of the bad boys of Hollywood, having altercations with paparazzi.

CORE was first founded to provide relief to the people of Haiti who were suffering from an earthquake in 2010. It has since expanded its efforts to other areas too.

One foot in front of another. @CoreResponse @drsanjaygupta #COVID19 @jaketapper https://t.co/BZksj88ZS4

“We are eager to offer private testing to film and television productions to not only help fund CORE’s programs that help vulnerable and underserved communities, but also to fortify California’s economy,” Penn said. “Enabling production companies to safely resume projects with testing will bring back thousands of film and television jobs to Los Angeles, and that’s a critical next step for restoring life in our city.”

“Thank you @SeanPenn and volunteers from CORE who are partnering with us and running a COVID pop-up testing location in East LA. #HeroesOfCovid19 #LAStrong #COVID19,” Los Angeles Deputy Mayor Jeff Gorell wrote on Twitter.

Ann Lee said, “We have expanded to private testing to help offset the amount of funding necessary to continue offering free testing and critical relief services for vulnerable communities who have been significantly and disproportionately impacted by the pandemic. We could no longer wait for government agencies to respond by providing additional funding and support.”

Sean Penn tweeted on Saturday, “For major theatrical film distributors to advertise films in ways that encourage the wrongminded notion that Covid 19 is behind us, is just dead wrong. We can support business’s opening, but only when those businesses protect & inform within every ad & action.”

He also tweeted, ”Why is our president speaking to us as though we are a cowering nation without constitutional faith? When did we become a nation who’d choose a braggart, blow hard & burgler of bankruptcies to be our “daddy”?”

In other Sean Penn news, a new books claims that the actor came very close to being arrested together with Joaquín “El Chapo” Guzmán in 2015. That was when Penn traveled to interview the Mexican drug lord. Apparently Mexican and American law enforcement agencies already knew where Guzman was hiding and decided to act once they heard of Sean Penn’s visit. But, according to a new book called “El Jefe: The Stalking of Chapo Guzmán” by Alan Feuer, a windstorm prevented the police helicopters from reaching their target and the mission was scrubbed.