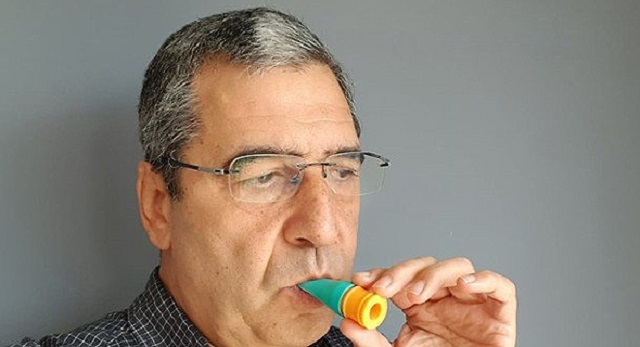 The Tel Aviv District Court yesterday denied a request by foreign companies to order Israel’s Ben Gurion University to cease the development of a new device for the rapid testing of the Coronavirus. The court also ordered the foreign firms who filed the request for a restraining order to pay court costs totaling NIS 25,000 ($7,350.)

Professor Gabby Sarusi of Ben Gurion University is currently working on something called an “Owl Device.” It looks kind of like a kazoo and a person simply needs to breathe through it to be tested. So no long wait for the results of a blood test.

Every country in the world is waiting anxiously for such a simple test. This is especially true in Israel where the government may be forced to enact a nationwide shutdown over the Jewish holidays which begin next Friday. Israel is nearing 4,000 new cases a day.

The plaintiffs claim that the Israeli developers have wrongfully taken credit for inventing the device and maintain that they are only working on its manufacture.

Ben Gurion University now says that it will be able to continue its quest to raise $25 million for the project.

The court ruled that “the applicants (the foreign companies) are petitioning to paralyze the parallel activities of Prof. Gabby Sarusi, who is competing with them and this has not yet been proven [which is a necessary step] before the ban imposed on him to compete. To justify such a drastic step, clear factual groundwork is required. This is far from the degree of commitment required.”

“But serious charges require seemingly reliable evidence of quality to substantiate. And drastic temporary relief also requires highly reliable evidence. And this evidence is supposed to be in the hands of the applicants. They allegedly sent the respondents preliminary drawings and records of the invention. They sent them details of how it was supposed to work. Not attached. The appendices attached to the application letter include only general information, which is known to the public.”

So in other words the court said that first, the plaintiffs must prove their case before they can enjoy the remedy of a restraining order.

Eitan Liraz, the attorney for the respondents, and Professor Gabby Sarusi stated: “The district court’s firm determination speaks for itself; the court ruled, among other things, that [in] the plaintiffs’ claims there is no evidentiary basis against the university and Professor Sarusi, even seemingly; they are nothing but “general statements”, in which it is not enough to even establish an alleged cause for this action.”