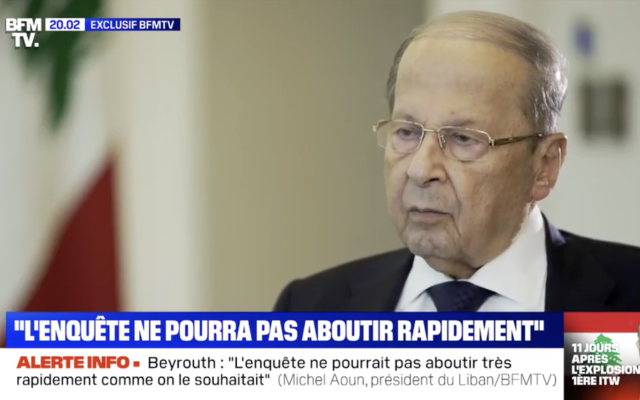 Just two days after Israel and the UAE announced Thursday the establishment of full diplomatic relations, Lebanese President Michel Aoun told French TV he does not categorically rule out negotiations with Israel.

Speaking with BFM TV network on Saturday Aoun answered about the possibility of ending the conflict with Lebanon’s neighboring country and a longtime enemy: “That depends.”

“We have problems with Israel and we have to resolve them first,” he said. When asked to respond to the new reconciliation in the Middle East, Aoun replied that the UAE is an “independent country” that could do as it liked.

Aoun appearing as rejecting the Palestinians’ anger over the deal and neglecting the Arab League peace initiative (2002), which tied normalization with Israel to a full withdrawal from the West Bank and Gaza.

The surprising attitude towards possible negotiation with the Jewish state comes after decades of Israel fighting the terror group Hezbollah which is supported by Iran and is deeply embedded in the Lebanese government.

For Israel, the deal with Abu Dhabi marks normalization with a third Arab state after Egypt and Jordan.

Aoun’s comments came less than two weeks after a massive explosion rocked the Lebanese capital of Beirut, sparking anti-government protests and a wave of conspiracy theories pointing the blame at Israel.

Both Hezbollah and Israel denied rumors that Israel was involved in the August 4 blast, which leveled a large part of the city’s harbor, killing 170 people, injured thousands, and leaving hundreds of thousands temporarily homeless.

Many Lebanese blamed their government for the tragedy, which was caused when thousands of tons of ammonium nitrate stored in a warehouse at the port for more than six years, apparently with the knowledge of top political and security officials, ignited, setting off a blast that created a crater 43 meters (141 feet) deep.

Lebanon: A Country in Economic Crisis

Ammonium nitrate is used in the manufacture of explosives and is also an ingredient in making fertilizer.

Reuters reported that government officials had been warned of the danger of the warehouse as recently as July. Documents allege that customs officials asked to move the vast trove numerous times, but never received a reply.

After protesters stormed several government ministries, the country’s entire cabinet resigned on August 10, with Prime Minister Hassan Diab blaming his predecessors and a political class whose “corruption is what has led to this disaster that had been hidden for seven years.”

Anti-government protesters set up symbolic nooses at Beirut’s Martyrs’ Square to hang politicians whose corruption and negligence they blamed for the blast. Among the cardboard cutouts hung by protesters were those of Aoun and Hezbollah leader Hassan Nasrallah.

Agencies contributed to this report

In this article:Finance, lebanon, Hezbollah, Israel-Lebanon